International demand for wearables continues to grow at least a little every quarter, the latest IDC research shows, though the most recent uptick — 5.5 percent in 2018’s second quarter — still isn’t huge. Increased shipments from wearable makers can be attributed to the increasing popularity of smartwatches, including Apple Watches, which come with more features and higher price tags than decreasingly popular basic fitness monitors.

“Two key forces were at work during the quarter,” said IDC wearables research director Ramon T. Llamas: “stronger demand for smart wearables and slower declines in the basic wearables market. Users have come to want more from their wearable devices, and smart watches have met that demand.”

Apple retained the top position in wearable shipments internationally, thanks in part to increasing demand for LTE-equipped models that are sold at carrier stores worldwide. It shipped a million more watches this quarter than a year ago and had 17 percent market share, according to IDC — up 4 percent over the second quarter of 2017. 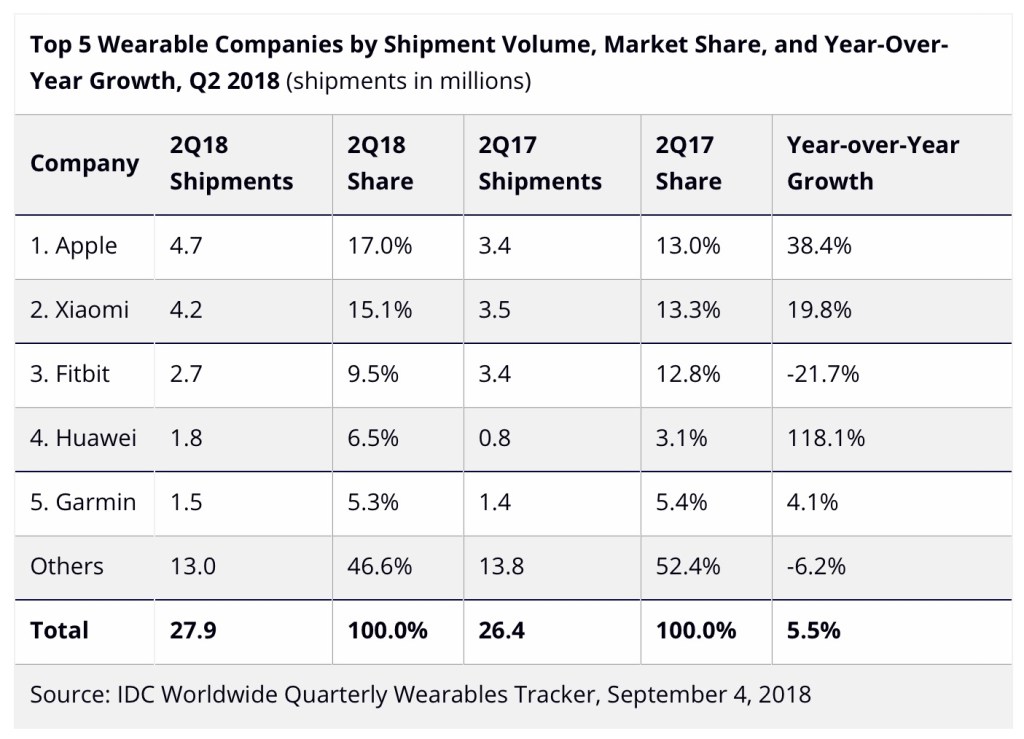 With 15.1 percent market share, Xiaomi ranked second by offering everything from inexpensive shoes and Mi Bands to children’s watches, jumping from 3.5 million units shipped in the same quarter last year to 4.2 million this quarter. At 9.5 percent share, Fitbit — declining in total unit shipments due to falling basic wristband sales — took third place with strong smartwatch sales and a solid focus on the commercial market.

Though Huawei had only 6.5 percent of the market for the quarter, it jumped substantially in shipments — up to 1.8 million from 0.8 million — and began to see growth outside its home base of China. Garmin grabbed 5.3 percent, with shipments nearly the same year over year, but that was enough to take fifth place and keep Samsung out of the top five. Even so, the Korean company and others still collectively represent 46.6 percent of wearable shipments.