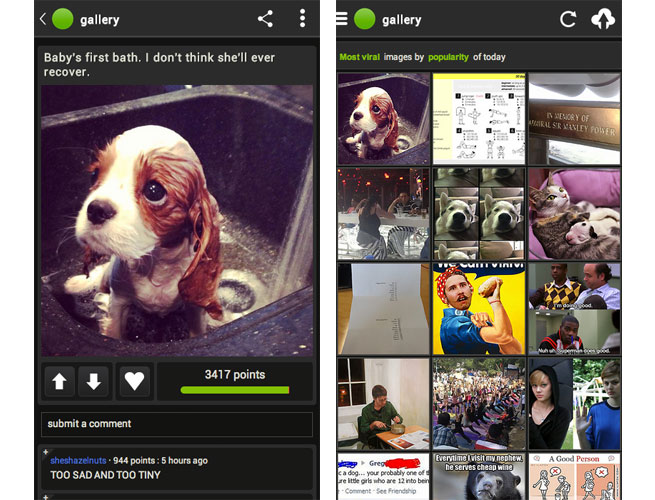 Imgur, one of the web’s most popular image-sharing apps and a destination for viral pictures, has finally launched its first official Android app, and an iPhone app is on the way.

San Francisco-based Imgur is best known for its ties to the mega-popular community news site Reddit, where its users share enormous amounts of Imgur links. And last October, Imgur went from being a place to simply upload images to a destination like Reddit for looking at and submitting viral images and memes. It now attracts more than 4 billion page views and more than 80 million unique visitors a month.

But the service, which first launched in 2009, has always been a bit weak on the mobile front. It offers an open API and has let mobile developers take advantage of it so they could build their own unofficial Imgur apps. I, for example, have been using Imgupr on the iPhone for more than a year for occasional image sharing. Then we finally saw signs of life on the mobile front from Imgur itself, with a beta launch of its Android app in April. Now that app has launched out of beta.

The Android app is fairly simple but does a good job of mimicking the web site. First, it’s a great image sharing tool if you need to post a picture to Reddit, a message board, etc. Second, it’s a gallery for viewing viral images of cute animals, memes, GIFs, jokes, and oddities.

“We wanted the app to work just like the main site,” Imgur founder and CEO Alan Schaaf told VentureBeat. “We’ve been working on this six months and collecting feedback.”

While the launch of the Android app is a big step for the service, Imgur initially planned to release both Android and iPhone versions of the app together. But Schaaf said Apple has routinely rejected the iPhone application it built on grounds of copyright infringement and inappropriate content.

Schaaf said Imgur has submitted the app for approval from Apple several times. He said Apple first knocked the organization for having too much content sourced from copyrighted materials. But Imgur explained to Apple that it is DMCA compliant and removes any infringing images when it is notified. Then Apple didn’t like how easy it was to access adult-focused content.

“Pedobear got us rejected four times,” Schaaf said. “So we’ve made it harder to find crude content.”

Schaaf hopes the iPhone app will officially launch in a “few weeks.”

Imgur is bootstrapped and makes the majority of its revenue from advertising. The company is “considering” looking for funding and has 10 employees.

Check out more images of the Android app below.