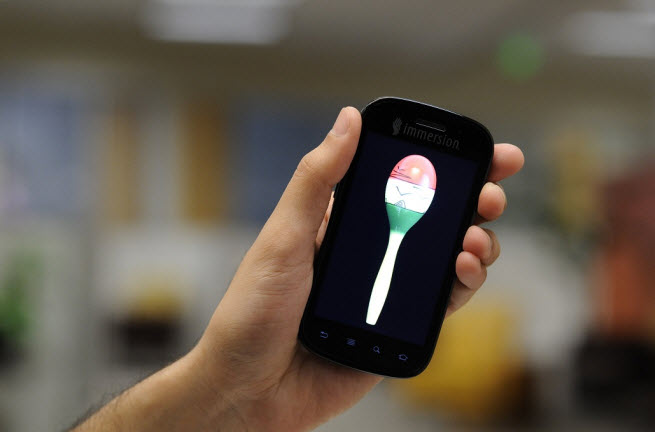 More than 400 million mobile phones give you vibrational feedback thanks to technology from haptics (touch sense) firm Immersion.

Now the San Jose, Calif.-based Immersion is improving the nature of touch feedback in mobile phones with HD Integrator, which allows for much deeper integration of touch into Android devices. The technology can now be customized for consumers and take advantage of new high-fidelity actuators. Developers can now create realistic and engaging effects like the feel of a shaking maraca (pictured).

The technology helps create a “mental model.” The sense of touch can help convey a mental model in the same way that someone walking up a hill feels that the hill is steeper, compared to a person who is walking alongside a path in a sideways manner on the hill. Mental models can help communicate information and influence behavior. The tactile sensations of a shaking maraca can fill in the gap of what is happening.

“With HD Integrator, (gadget makers) can easily incorporate dynamic HD haptics throughout the Android user interface, resulting in a more responsive and higher quality haptic experience,” said Dennis Sheehan, vice president of marketing for Immersion.  “HD Integrator harnesses the capabilities of high fidelity actuators to serve as a communication channel to the user, an engaging entertainment platform, and a point of distinction.”

With the HD Integrator, a user interface can feel metallic, soft, or springy. Gestures such as finger swiping can be performed both on the screen or with the phone itself. And animations can be transformed into “multi-modal” experiences with cool sound and touch effects. The technology can layer effects so that you can distinguish the feel of an explosion or gunfire happening at the same time in a mobile game.

Andrew Hsu, the father of the capacitive touchscreen, previously told VentureBeat that he believes the future of mobile screens lies in haptics, rather than gimmicky features like 3D.

Immersion was founded in 1993 and it has about 100 employees around the world. Its technology appears in game consoles, automotive controls, medical simulators and mobile devices. Customers include Samsung, LG, Nokia, Pantech, Fujitsu and Toshiba.

Haptics has evolved over the years from a simple buzz vibration for alerts on your mobile hone to programmable haptics, where you feel different effects when scrolling or swiping. And HD haptics now include a broader range of distinct effects, fast response time, enhanced realism and dynamic effect capabilities. All of that means is that the sense of touch feedback is getting better.