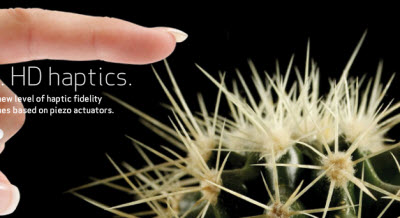 When Nokia announced its new N8 smartphone this week, it was another step forward for touch feedback. Immersion confirmed that it has provided “haptics” technology that is more accurate than other touch-sensation technologies used in the past.

That is, San Jose, Calif.-based Immersion lets you feel tactile feedback when you touch the screen. If you dial a button, a tiny vibration emanates from the touchscreen to confirm that you hit the right key. This is one of the key ingredients needed as the world migrates to a better user experience through touchscreen devices. Too often, it’s hard to hit the right keys on small screens, so dialing, sending text messages, or otherwise interacting with smart phones is too slow compared to the speed with which you can get tasks done on a computer.

The N8 uses the touch sensors not only for number dialing, but as a feedback system within the user interface itself that tells you when you have scrolled to the right point on the screen or accomplished similar tasks. As such, it’s one of the first to have more extensive integration of touch technology. The new Nokia phone, which debuts in the third quarter, is one of a number of new models using a brand new “high definition” touch sensor and vibration technology from Immersion, which designs the component technology and licenses it for others to manufacture and put into products.

“With the popularity of touchscreens, the user interaction becomes a lot more complex,” said Christophe Ramstein, chief technology officer at Immersion, in an interview. “We are at the point where it has bridged the gap from being a nice feature to a must.” 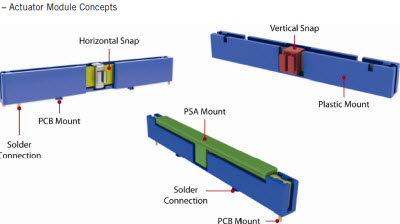 Immersion’s older TouchSense technology, traces its roots back to when the company was founded in 1993. But now haptics is moving on from the older technology to sensors with piezo electric actuators. These sensors are much more sensitive than the older ones, they deliver feedback instantaneously, and they’re quiet. They’re much more reliable as well because there are no moving parts in these tiny chip motor/sensors.

In the past, actuators were electro-mechanical devices with a sensor (which detects inertial movement) and a motor to produce vibrations. A tiny motor would activate, spin a rotor and produce vibrations just like a washing machine does. Immersion has figured out how to oscillate an actuator in different directions. A piezo electric actuator is a ceramic strip that deforms under an electric charge. It can respond within a millisecond, while older sensors took 40 to 50 milliseconds. To a human, that makes a huge amount of difference, Ramstein said.

The good thing about piezo electric actuators is that they have been around for a long time, are cheap, and are used in devices like car lighters, helicopter rotor sensors, or barbeque starters. The sensors are small, and the ceramic strip itself is less than a millimeter thick.

One of the more interesting uses is the integration of touch into Synaptics’ futuristic FUSE sensor platform. Synaptics, which makes touchscreen sensors, used Immersion as a partner in its FUSE concept phone announced in December. FUSE integrates next-generation visual feedback on a touchscreen with touch feedback. You can, for instance, squeeze the sides of the phone and see and feel tiny balls being squeezed out of a hole in an image on the screen.

Beyond touchscreen phones, Immersion’s technology is used in Sony and Microsoft force-feedback game controllers. And it is used in medical surgery simulations, automobile dashboard dials and other devices. The Lexus RX150 uses haptics that let you navigate through a car navigation and stereo system without taking our eyes off the road. Samsung uses tactile feedback in a digital camera.

But the phone technology is just starting to get interesting. Ramstein showed a demo of a future text-messaging system where you can hold a live text message chat with a friend. You can create a little heart on the screen, tilt the phone to deliver to the other person, and then feel the beating heart with your finger. A boyfriend and girlfriend can touch the screen simultaneously and “feel” the other person pressing back. (Yes, we’re not quite at phone sex, but we’re getting there!). You could also send someone a picture of a nail and make a hammer sound when someone “nails it,” or does something good. It’s a shorter but precise form of communicating.

Devices with the new technology, such as the N8, are hitting the market by year end. The new technology and its gaining acceptance bodes well for business. Immersion has some rivals such as Artificial Muscle, but it has fewer rivals now that it has exited building its own devices and has moved to a pure licensing model. It has more than 800 patents.

It remains to be seen if publicly-traded Immersion can profit from the technology. Immersion sold off the money-losing simulation equipment business, which contributed to a $28 million loss last year on $27 million in revenues. The company just reappointed its former chief executive, Victor Viegas, as its top executive. Viegas retired in 20o8 but returned to the company in late 2009, replacing his replacement, Clent Richardson. Immersion made Viegas’ role as CEO permanent last week. The company may or may not prosper. But I’m still very anxious to pay Steve Jobs’ cab fare so that he can visit Immersion in San Jose and get tactile feedback into Apple’s iPhones and iPads.