In the fierce battle for our mobile attention, Facebook has almost no peer.

Google and Facebook have similar total reach among U.S. adults, between 228 and 222 million monthly users. But Facebook stands alone when you combine time spent and total reach, even if you add Google and YouTube together.

That’s just one of the findings in a new report released by Verto Analytics.

Which means in a user-and-time chart, Facebook is all by itself: 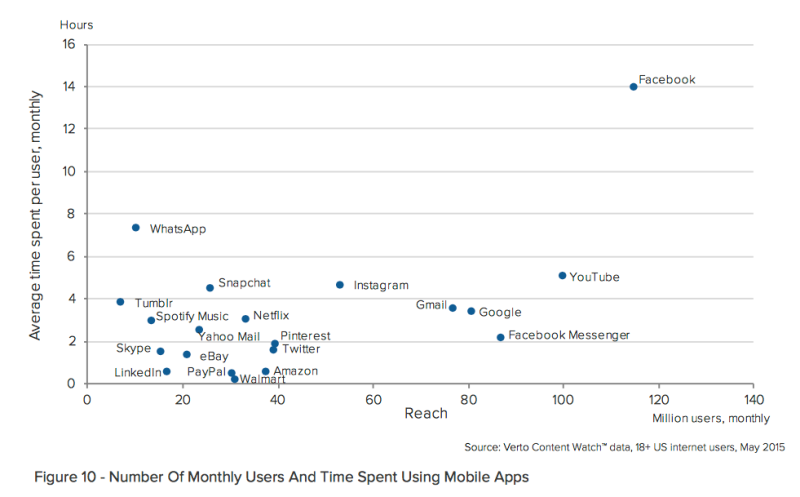 This matters mostly because in a world of free services in which we — the great device-using unwashed — are the product and ad dollars drive innovation and competition, reach times engagement equals revenue. In short: Attention winners become financial winners.

(That’s something we’ll be studying at our upcoming MobileBeat conference in July.)

Interestingly, however, Google has a more diversified spread of consumers’ attention, with its users accessing Maps, Gmail, Google search, YouTube, and the Chrome mobile browser. Facebook’s usage graph includes WhatsApp, Messenger, and Instagram, but easily more than 76 percent of consumer attention that it captures is still in its main app.

The result of numbers like these can be seen in the categories where we spend our time on mobile devices. The vast bulk of it is in social networking, followed by games:

But there’s a big difference between reach and engagement, the report cautions. And that’s something Facebook sees right within its own properties:

“The Facebook Messenger app has a very high reach but enjoys only modest time spent per user in the US, whereas the opposite holds true for WhatsApp,” the report stated.

For example, while Messenger reaches 87 million monthly users among adult Americans and WhatsApp reaches only 10 million, WhatsApp users spend a whopping five hours more per user in the app than Messenger users.

The full report is available from Verto Analytics.