Ineda Systems is announcing today it is developing a wearable processor with an always-on battery that can last a whole month. The company also said it has raised $17 million from big chip industry players. The aim is to supply chips for the multitude of devices that are coming with the new age of wearable computing and the internet of things. 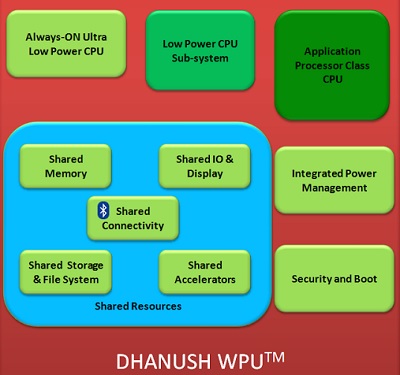 Hyderabad, India-based Ineda is designing its Dhanush chips from the ground up for wearable devices and the internet of things. That means the chips have to operate on as little electrical power as possible, thanks to a unique design. Investors include Walden-Riverwood Ventures, Samsung Catalyst Fund, Qualcomm, Indus Age, Imagination Technologies other existing investors.

The startup chip design company has come with a design that it calls a “wearable processor unit,” much like graphics chips are called “graphics processing units” and microprocessors are called “central processing units.” The wearable device has multiple components and only uses those which are needed at any given time. The name Dhanush is Sanskrit for a bow, as in bow and arrow.

Such WPUs can take input from sensors on an always-on basis, meaning they can take data from devices such as smart watches and continuously update applications for users. The company says it will have 10 times less power consumption compared to rival devices. 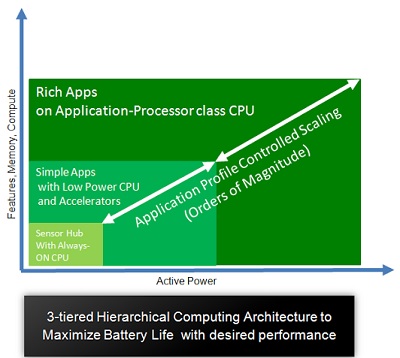 “The class of the WPU we are designing for wearables is very unique,” said Dasaradha Gude, chief executive of Ineda, in an interview with VentureBeat. “Unless you design from the ground up, you will have the same problem. The power requirements are too difficult. What we have done is the first in the world. This is a brand new architecture.”

Big companies like Intel are adapting their chips for smartphones, laptops, and even desktops for the wearable world. But Ineda doesn’t believe such approaches are sustainable and can’t offer the power reduction required.

Ineda, which has a U.S. office in Santa Clara, Calif., is targeted devices such as smart watches, health and fitness trackers, and other wearable devices.

Gude has 25 years of chip industry experience with companies like Advanced Micro Devices. He helped work on AMD’s accelerated processing units (APUs), which combined GPUs and CPUs on the same chip.

The system uses a new patent-pending Hierarchical Computing architecture, which is different from well-known processor architectures such as x86, which is used by Intel and AMD. It has its own security built into it. This architecture can be combined with low-power, high-performance MIPS processor cores and PowerVR graphics into a complete wearable chip. The Hierarchical Computing architecture has multiple tiers of CPUs within the larger WPU device. All of those CPUs can operate either simultaneously or independently.

Gude said that Android requires too much operating power to serve as the OS for the device. The company has a single operating system that continues to operate all of the time. Depending on what is running at the time, the operating system changes. 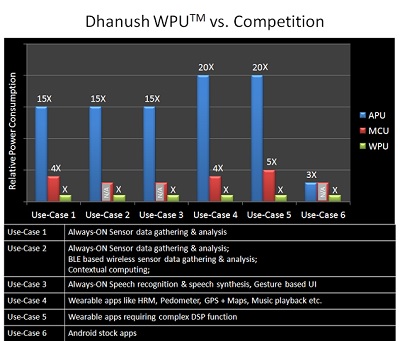 Above: Ineda’s advantage in wearables

“We have multiple CPUs, including small CPus and a large CPU in the same chip,” Gude said. “That is common today. The differentiation is we also have multiple operating systems within the CPU. If you are running on a small CPU, you use a small OS. The power consumption can be much lower.”

But the WPU can basically run a variety of operating systems, as required by customers.

Gude isn’t sure which application will come first. Dhanush chips will have low price points that are appropriate for wearable markets. Gude believes that wearable chips will take off in the same way that smartphones and tablets have taken over, only that there will be a market for many more wearable devices.

“Wearable electronics and devices for the Internet of Things (IoT) are an open field for innovation, and Ineda is entering the market at the right time with a truly disruptive architecture,” said Yarlagadda. “Leveraging multiple Imagination IP Cores, Ineda’s Dhanush WPU brings the wearable device industry the performance and power reduction it has needed to ensure wide-scale adoption.”

The company has prototypes and it is sampling chips to potential customers.

“We are hoping we can get a design win in the next couple of months and then go to production,” Gude said.

The Dhanush family of chips will operate at low frequencies, ranging from 10 megahertz to 500 megahertz. The Dhanush WPU family will have a variety of versions for different markets. Those products are dubbed Nano, Micro, Optima and Advanced.

The Nano version is designed for simple wearables with appliance-like, microcontroller-class memory and computing requirements. The Micro version is designed for low-end devices such as smart watches, with a sensor hub that can operate in an always-on fashion. The Optima version can also run a mobile-class operating system and support mid-range devices. The advanced version has all the features, including rich graphics and a user interface, with the ability to run operating systems such as Android.

Ineda has raised $25 million to date and it has 180 employees. Rivals include Samsung, Intel, Qualcomm, Imagination, and many others.

“We are using much less power than other devices,” Gude said.