Four years ago, Instagram introduced Direct, for private messaging, and today the Facebook-owned company announced that 375 million people are using the feature. In addition, Direct is getting an update that merges the sections containing normal messages and ephemeral ones, with the goal of making it easier for you to communicate with friends and keep track of all your conversations.

Ephemeral messaging within Direct became available in November, at which time Instagram said 300 million people were already using the permanent messaging tool. Since then, Instagram Direct has offered two distinct areas, one dedicated to just ephemeral messages in a Stories-like row and a list of permanent conversations that don’t expire after 24 hours. The company declined to share the breakdown between permanent and ephemeral messages over the past five months. 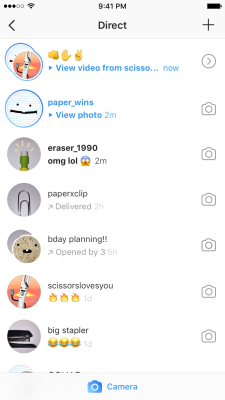 Instagram claims it “wants to make Direct the best place to have fun, visual conversations with your friends,” and blending the two areas together could help ingrain Stories-like messaging in people’s minds. Instagram may also have been watching to see whether people would adopt the feature before merging the conversation tools.

Within the new Instagram Direct, users can tap on the blue camera icon located at the bottom of the screen or in an existing thread to take an ephemeral photo or video. When you’re done, tap the arrow to select the individual or group of friends it should be sent to, and that’s it. New ephemeral messages sent to you will be highlighted in blue within the Direct Inbox and can be viewed twice (the first time and then replayed once). The sender will receive a notification when the message has been replayed or a screenshot has been taken.

The latest update is available on Instagram’s iOS and Android app.