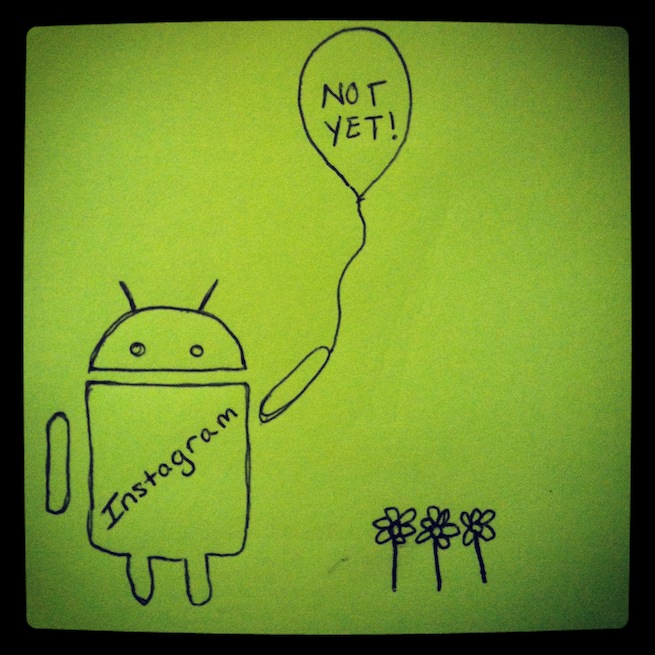 Instagram announced that it hit 27 million users today, and continues its ongoing mantra that the photo sharing app will come to Android “really soon.”

Instagram is a photo sharing social network that only exists on the Apple iPhone. It allows people to take pictures, assign filters, and then post them to a variety of social networks including Facebook and Twitter. In November 2011, the company had already amassed 13 million members in its 13 months of existence. That number has now grown by 14 million in the last 5 months. Founder Kevin Systrom, who spoke about the achievement at interactive conference South By Southwest, did not disclose how many of those 27 million users were actually active users.

He did, however, wave a phone for the audience that supposedly had the Instagram Android application on it. The application has been long anticipated by Android users who have waited nearly a year and a half for the iteration. But its estimated time of arrival remains the same as always: “coming soon.” Systrom did note that the application was fast, however, and the company has “been able to put together one of the most incredible Android apps you will ever see.”

Despite the long turn-around time for Instagram’s Android app, the company may be looking into a Windows 7 phone version.

It is also rumored that the company is raising a $40 million round of funding that could rocket its valuation from $25 million up to $500 million. It hasn’t yet figured out a business model, however, at least not one that it has mentioned publicly. According to a report by the Wall Street Journal, venture capitalists are hesitant to jump into the funding pool without first knowing what Instagram’s financial potential is. The company lacks advertising — a possible business model — as of now, and may be hard pressed to include ads in its photo stream. It could, however, monetize brands pages.