While there are tons of cool photo-editing applications for the iPhone, a new app called Instagram stands out as being particularly ambitious.

The application was created by the same San Francisco team that built location-based service Burbn, a team that has raised $500,000 from Andreessen Horowitz and Baseline Ventures. With Instagram, co-founders Kevin Systrom and Mike Krieger have shifted their energies to image-sharing, though location is still a key part of the service.

Systrom said his goal was to create an app that lets users “experience moments in [their] friends’ lives through pictures as they happen,” starting by making it easy to edit and share pictures. So users can take a photo and apply a filter (it looks like there are 12 filters in the version launching today), then quickly post the photo to one or more of their social networks and photo sites (including Facebook, Flickr, and Twitter) at once. And unlike many photo-editing apps, Instagram is free.

Another goal was to make the upload and sharing process as fast and robust as possible, Systrom said. In the preview version that I played with, the upload process was almost instantaneous, even when I was cross-posting the photo to multiple services. Other early users have commented on the speed. (Whether the uploads will remain quite as fast when the app’s userbase grows remains to be seen.)

Those features are already compelling, but they’re not entirely unique. (For example, Photoshop Express is free and includes Twitter and Facebook sharing capabilities.) What should really set Instagram apart is how it allows users to interact with each other while within the app itself. Photos can be tagged with a caption and your location, and you can either make them private (only available to users you approve) or public. When you start “following” other Instagram users, you see all of their photos in a single feed. You can comment on the photos, or just say that you like them. There’s also a page highlighting the most popular photos of the moment. 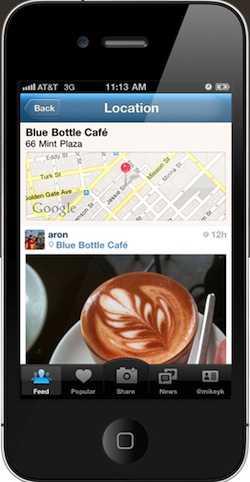 People may come for the filters, but they’ll stay for the community of their friends and fans. …

Most photo sharing sites are closed friend models. We’ve chosen as a product design decision to make it an open network where you can follow people. Why? We think there are plenty of closed networks for sharing with your closest friends, but none that really hammer on the openness and discovery aspect. We want people to connect through a world of images, not just with their best friends.

I’m having fun following some of my design idols: simplebits, maxvoltar, danrubin to name a few, as well as some close friends: chris, grex, colerise. Being open means you publish more frequently and think less of how this, that, or whatever photo fits into an album, and think more about what it communicates to others.

It’s clearly a dynamic inspired by Twitter’s success — but we bring it to a purely visual experience with comments+likes added as a bonus.

As for making money, Systrom said the company is more interested in attracting users for now, but there are opportunities to charge for extra features in the future.