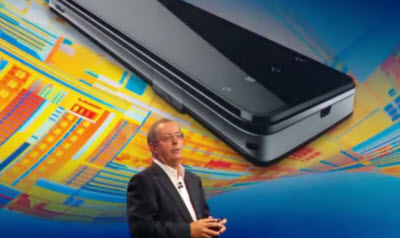 Intel chief executive Paul Otellini announced today that an Intel-based Android smartphone will be hitting the market in the first half of 2012.

Otellini said the chip in the smartphone is code-named Medfield and is based on Intel’s own PC-based computer architecture. Andy Rubin, head of the Android business at Google, came out on stage at the close of Otellini’s keynote speech at the Intel Developer Forum in San Francisco to tout an alliance between Google and Intel.

In a question-and-answer session after the talk, Otellini said we will see multiple vendors from around the world launching the Medfield-based Android smartphones starting in 2012. Asked why Intel might succeed in smartphones after years of failure, Otellini said, “We finally got it right.”

Otellini said it has taken a while to build chips for the ecosystem that reflect compatibility with a continuum of computing and mobile devices. The original plan was for Nokia to ship phones with Intel chips in them this year. When Nokia shifted to ARM-based Windows Phone 7 devices, Intel lost its major customer.

The Intel chip represents the world’s biggest chip maker’s bet that it can beat power-efficient chip vendors who use the ARM architecture for their smartphone designs. ARM has the upper leg, but Intel keeps arguing that, as performance of smartphones and tablets keeps growing, it will eventually have an advantage in supplying chips for the smartphone market.

Rubin held a version of the Medfield-based smartphone on stage. It had a big 4-inch or so touchscreen and looked like it was about a third of an inch thick. Google might very well be the manufacturer of that phone, since it bought leading phone maker Motorola for $12 billion, said Mark Stahlman, a partner at information consulting firm TMT Strategies.

“I think this is the real thing,” Stahlman said, after he saw the keynote speech. “It could grab a lot of market share.”