Intel is a bellwether for the PC market, and its fourth-quarter results are a good benchmark for what will happen in the computer market in 2015.

“The fourth quarter was a strong finish to a record year,” said Intel CEO Brian Krzanich, in a statement. “We met or exceeded several important goals: reinvigorated the PC business, grew the Data Center business, established a footprint in tablets, and drove growth and innovation in new areas. There is more to do in 2015. We’ll improve our profitability in mobile, and keep Intel focused on the next wave of computing.”

For the first quarter, Intel projected revenue of $13.7 billion and gross profit margins of 60 percent. Since Intel wasn’t optimistic about the upcoming first quarter, Intel’s stock is falling in after-hours trading. The stock is currently at $35.49 a share, down 1.83 percent.

Intel’s stock rose 40 percent last year, the best since 2003. That was because the PC market didn’t fall apart. On top of that, Intel had a resurgence in chips for mobile devices, and it also launched a new line of chips for the Internet of Things. While Intel sells roughly 90 percent of the chips used as processors in data centers, the company has been losing a lot of money in mobile chips.

At the recent 2015 International CES, Krzanich gave a keynote speech. He highlighted applications such as self-piloting drones, 3D printing, wearables, and a new chip dubbed Curie for the Internet of Things. Krzanich also announced that Intel would invest $300 million in diversity programs over the next five years. Intel also showed off tech that uses its new RealSense 3D depth cameras.

Market researcher IDC reported that global PC shipments fell 2.4 percent from a year ago in the fourth quarter. The overall decline in 2014 was 2.1 percent.

Mobile and communications group revenue was negative $6 million. Software and services revenue was $557 million, flat from the prior quarter and down 6 percent from a year ago.

For 2014, Intel said it shipped more than 46 million units of chips for PCs, servers, tablets, phones, and the Internet of Things. It also completed a $5 billion stock repurchase in the fourth quarter and increased its cash dividend to 96 cents a share per year.

“Intel had a solid fourth quarter with record revenue which was really a repeat of many of their quarters over the past year,” said Patrick Moorhead, analyst at Moor Insights & Strategy. “That is, datacenter saw big growth, PCs saw commercial growth driven by established regions, and mobile losses continue but at a lower pace. It will be important to keep an eye on the PC market as Intel did see a sequential revenue shrink driven by original equipment manufacturer (OEM) inventory bleed.  Networking was a key revenue growth area and it’s share shift versus a market growth story as it is in servers driven by the cloud.  While mobile losses are high, it’s not a surprise, and it will be important for Intel to hit their commitments to reduce the losses by $800 million for 2015.” 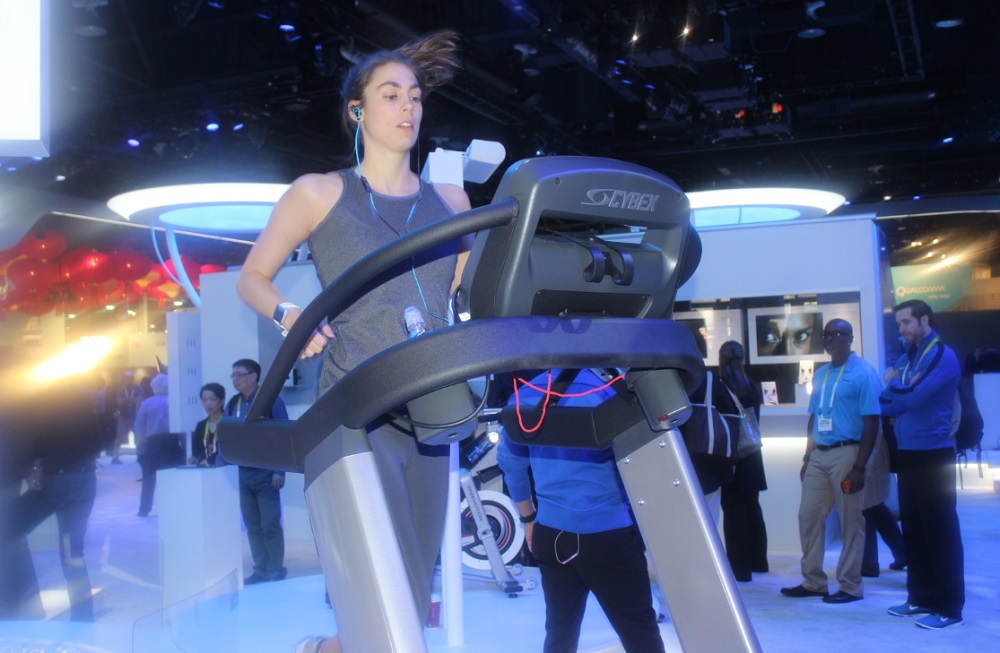 Above: This woman at the Intel CES booth is wearing a Basis Peak smartwatch and SMS headphones. On day one of CES, she ran 11 miles.