Intel took the wraps off its integrated Internet of Things platform that is starting to drive real revenue at the chip giant. In the past year, the IoT division’s revenue is expected to grow 18 percent to $2 billion in 2014, according to Doug Davis, head of the division, in a media briefing today. And now the company will give customers a single platform to create Internet of Things applications.

The Internet of Things refers to making everyday objects smart and connected to the Internet. Those devices connect, generate data, integrate with other systems, and then produce data that has to be analyzed in the computing cloud. Davis said that billions of such devices will be connected in the coming decade. Intel has pulled together a platform that makes it easier for customers to implement their own solutions.

“Increasingly, applications like home automation systems and home security systems are being used,” said Davis. “We’ve grown the business and are excited. We realized we had a lot of components of the IoT. We felt we needed to bring all those things together.” 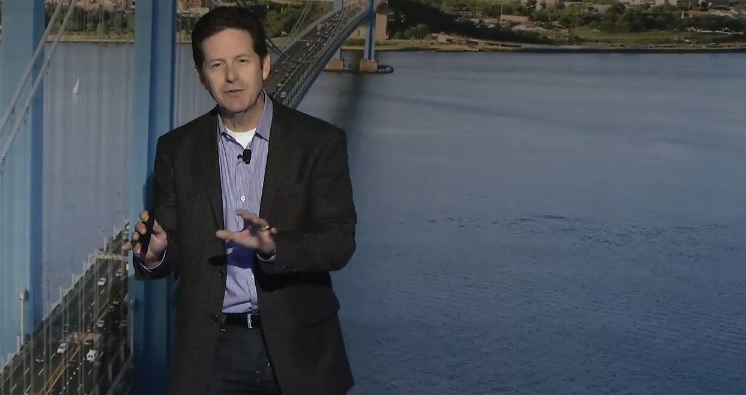 The platform will be a foundation that customers can use over and over. Intel will promote an ecosystem of vendors that will create pieces of the system.

Davis said the Internet of Things is growing in areas like industrial automation, as applied to tools in a factory or windmills in the North Sea.

“We aggregate, store, and analyze this data,” Davis said. “That will drive productivity and services at businesses.”

The Internet of Things is possible because Moore’s Law (doubling transistor count on a chip every two years) has brought the cost of computing down 60 percent in the past decade. The cost of sensors has dropped by two times in the past decade, and the cost of connectivity has dropped by 40 times. That has made it affordable to put sensors on everything, but building software to sift through the data and make sense of it is also important. For instance, Intel has helped create a smart parking app by collecting data on open parking spaces and telling people where the available spots are in real time. That is cutting the time spent searching for parking spaces by 43 percent, Davis said.

Here are some of the results of the technology services below: 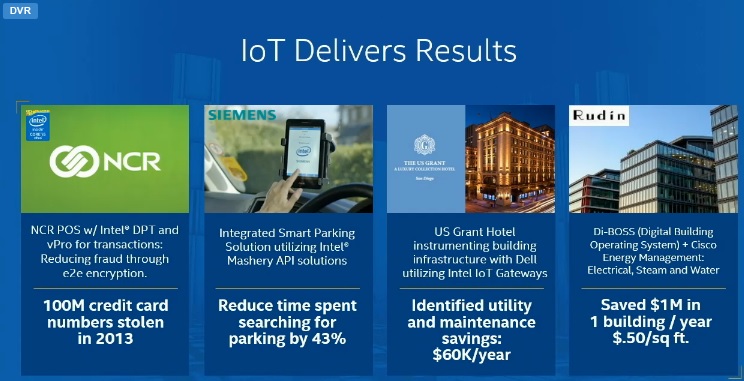 Above: Intel Internet of Things results