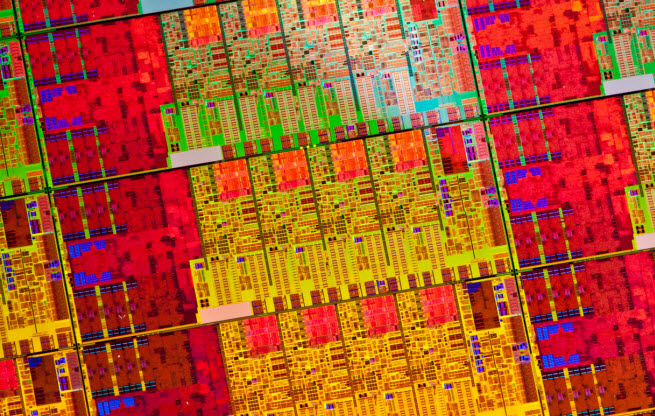 Iris is a hybrid processor-graphics combo on a single chip. It promises 50 percent better battery life than current-generation laptops and twice the graphics performance. It will become the brains of all sorts of computers, including gaming machines, desktops, and razor-thin laptops. Lots of computer makers are launching machines with the chips in June and July. Tom Kilroy, executive vice president and general manager of the sales and marketing group at Intel, announced the new product family at the Computex computer trade show in Taiwan. 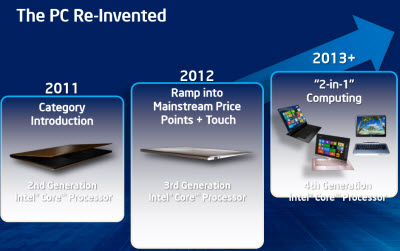 “In my 18 years at Intel, I don’t think I’ve seen so much innovation in form factors and new ways of computing,” said Navin Shenoy, vice president and general manager of the PC Client Group at Intel, in an interview with VentureBeat. “The opportunity for inventing the future is right in front of us.”

The Haswell chip family is the last hurrah for Intel’s outgoing chief executive, Paul Otellini, who has been succeeded by Brian Krzanich. The chip is coming out just as market researcher IDC has forecast that PC sales will decline 7.8 percent in 2013. That figure is revised from its previous forecast of a 1.3 percent drop.

You can blame that change on tablets, which have seen tremendous growth and are expected to overtake PC sales in 2015.

But Shenoy said he is encouraged by the innovation happening across the board with Haswell. The chip is spawning new hybrid devices, where a laptop can be converted into a tablet. One cool design HP launched this week is the HP Envy Rove 20, a 20-inch all-in-one desktop computer that can be converted into a touchscreen tabletop computer. You can play tabletop games on it and bring back family game night.

A bunch of software companies, from Electronic Arts to Sony, are making software for tabletop computers. More than 100 games, including Sesame Street and Monopoly, will be available for tabletop all-in-one computers.

“We view all of the new form factors as opportunities to drive growth,” Shenoy said. “It’s the complete reinvention of the computer as we know it. All computers are going to be thinner and lighter.” 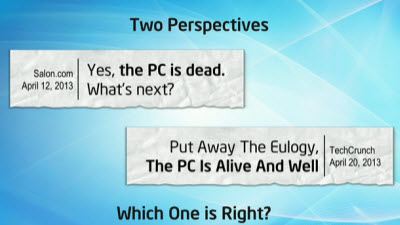 Rani Borkar, vice president and general manager of the Intel Architecture Group, said last week that Intel is getting that improvement not only from moving to a more efficient manufacturing process, but also because it designed the chip from the ground up for mobility and low power. For instance, the chips use extensive “power gating,” where unused transistors — the on-off components of digital computing — are turned off when they are not in use and reawakened quickly when needed. Borkar said new devices will have a better “instant on” responsiveness when you hit a button.

Intel will make a variety of low-power Core processors using the microarchitecture, each of them with different code names and final product names. Those products from high-performance servers to “sleek ultraportables” are rolling out starting June 5 and throughout the year, and they’ll blur the line between devices.

Intel is also going to use Iris to deliver new kinds of features such as voice recognition, face recognition, eye-tracking, and gesture control. Such input systems will enhance interaction with computers beyond the traditional touchscreens, mice, and keyboards.

Kaizad Mistry, vice president of Intel’s technology and manufacturing group, said last week that Intel is using an enhanced version of its 22-nanometer Tri-Gate 3D transistor manufacturing process. That version is optimized for low power, giving transistors the same operating frequencies while consuming low power. Battery life for a laptop with a new Intel Core i7-4650U chip will be 9.1 hours for high-definition video playback, compared to 6 hours for a third-generation Core processor. On the MobileMark 2012 benchmark, the new chip will get 8.3 hours of battery life, compared to 6.1 hours for the predecessor chip. Standby battery life will be 10 to 13 days, compared to 4.5 days for earlier chips.

Borkar said the Haswell-based chips will scale from chips that consume just 6 watts to some that consume 75 watts. Intel first introduced its Atom processor for netbooks in 2008. Those failed, but Intel has a huge share in the mobile processing market for computers. Since 2006, Intel says, the integrated graphics performance of its microprocessor and chipset combinations (now often integrated in a single chip or a single package with two chips) has increased 75 times.

“The biggest breakthrough with Haswell is the nearly doubling of battery life and connected stand-by,” said Patrick Moorhead, analyst with Moor Insights & Strategy. ” This alone makes for a much improved notebook experience. Tied with lower-cost and more pervasive touch screens, this brings convertibles closer to delivering the convenience that 10″ tablets can provide. While they can’t replace a 10-inch fanless tablet yet with full PC performance, I think Intel will be driving the technology there over the next six months with a four-watt to five-watt part. Regardless, I think Haswell will help boost PC sales over the next six months based on the features launched today.”

The chip includes integrated eDRAM memory and an improved interconnect between the processor and the chipset across two chips that are contained in a single package. Intel said it achieves a “non-linear reduction” in idle power consumption thanks to a new power management design, new ways to power down a chip quickly when not in use, and new ways of moving data around the chip quickly.

Later this year, Intel will unveil the Silvermont microarchitecture for future Atom microprocessors, which are targeted at low power devices. The 22-nanometer, quad-core Bay Trail version of Silvermont will be used in tablets this holiday, Avoton will be used in microservers, and Merrifield will be used in smartphones.

He said about 50 designs are underway based on the Bay Trail chips. Intel will have six different desktop processors based on Haswell and 11 mobile processors.

Intel will have both quad-core and dual-core chips based on Haswell. The 22-nanometer quad-core chip will have more than 1.4 billion transistors, the on-off switches of digital computing. Back in 1971, the original 4004 microprocessor had just 2,300 transistors.