Intel is revealing what it calls the world’s smallest standalone wireless modem for connecting the Internet of things, or everyday things that are connected to the web like coffee machines that you can turn on with a mobile app. 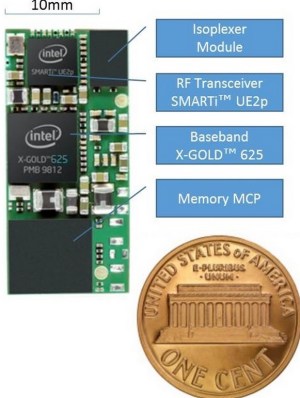 The Intel XMM 6255 3G modem is a chip that connects a device to a cellular network, which in turn can link billions of interconnected smart devices such as wearables, sensors, and industrial equipment. The chip is a little larger than a penny.

Chalk it up to technological progress. 3G modems have been shipping since 2001, when NTT DoCoMo turned on its first 3G wireless data network in Japan. At the time, the 3G modems could barely fit in the sizable cell phones of the day. Now, thanks to Moore’s Law (the prediction by Intel chairman emeritus Gordon Moore that the number of transistors on a chip doubles every couple of years), the chips are tiny. More than a billion have shipped over the past decade or so.

By 2020, Internet-connected devices are expected to number between 26 billion and 50 billion, according to Raymond James & Associates. The IoT European Research Center estimates there are 80 things connecting to the Internet for the first time every second, and by 2020, this will expand to 250 every second. And those devices will need a lot of modems.

Intel figures that 3G modems will be needed in industrial equipment, home appliances, security and safety devices, and all sorts of other things.

The 3G modem is important because the Internet of things combines both computing and communications. The 3G modems connect those devices to the computing cloud, where the big data is assembled and computed into something useful. Stefan Wolff, vice president of the platform engineering group at Intel, said the new 3G modem is ideal for networked sensors.

The entire XMM 6255 chip board with modem and other features is 300 millimeters square. It includes a SMARTi UE2p transceiver component, which operates on a tiny amount of electrical power. It has transmit and receive functionality, power management, and integrated power amplifier — all on a single chip. The smaller the chip and its components, the less electrical power they need and the less heat they dissipate. That helps them survive in conditions where Internet of things sensors are deployed. A farmer, for instance, may deploy a bunch of sensors to detect ground moisture in fields. Those sensors can send data over 3G modems to a computer, which can produce a report for the farmer on where and when he or she should water the field.

The XMM 6255 modem is built to deal with low signal strength in a network, so it can work fine in places like a parking garage or home basement. Devices like smart watches or sensors may not have enough space for a normal-sized 3G antenna.