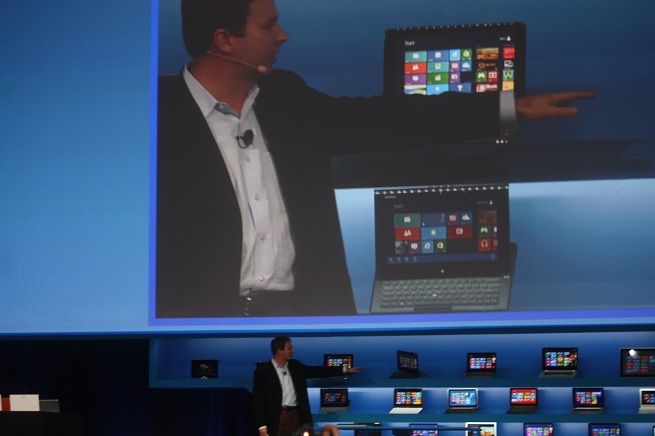 Intel is launching its code-named Haswell mobile processor for thin and light computers known as ultrabooks this June. That is a few months earlier than the world’s biggest chip maker previously expected, and it could fuel a whole generation of thin and light laptops and tablets.

The chip is Intel’s bid to save the PC from the attack of the ARM-based chip makers rising up from smartphones and tablets. Kirk Skaugen, the vice president of the PC client group at Intel, made the announcement at a press event at the Consumer Electronics Show in Las Vegas. The strategic importance of saving the PC tells you why Intel is accelerating the launch of Haswell chips.

Skaugen said the fourth-generation Intel Core ultrabook platform will be “game-changers.” He said there are 130 ultrabooks coming to the market this year, and 40 of them have touchscreens. Some of those will sell for as little as $599, compared to $999 18 months ago. Intel’s chips were retrofitted for today’s ultrabooks. But notebook computers based on Intel’s code-named Haswell chip coming this June will live up to the Ultrabook name, Skaugen said.

“This is the largest battery-life increase in the history of Intel, from one generation to another,” he said.

More than 150 million notebooks are three years or older. Now 15-inch notebooks are less than a half-inch thick. With code-named Haswell coming in a few months, those notebooks will become even thinner and have better battery life.

Separately, Intel launched an ecosystem dubbed Bringing Family Night Back. With it, companies such as Ubisoft, Electronic Arts and Lenovo will create family games that can run on new PCs that are tabletop computers, much like the one that Lenovo launched Sunday.