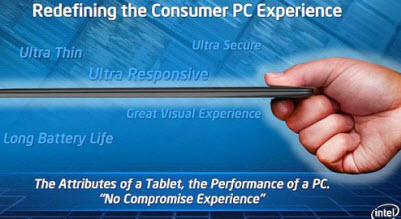 Intel said today it has created a $300 million fund to invest in “ultrabook” computers, which it considers to be the next revolution in personal computers.

As you can see from the photo, Intel, the world’s biggest chip maker, wants to drive the electronic industry to create ultra-thin mobile devices that combine the low profiles of MacBook Air-style laptops with the performance of full PCs. The goal is to make machines that have long battery life, great visuals, responsive internet, good security, and thin hardware.

To make that happen, Santa Clara, Calif.-based Intel has to design power-efficient chips. But it also needs other companies to make advances in hardware for ultrabooks as well. That’s where the fund comes in.

Intel executive Sean Maloney announced the Ultrabook initiative at the Computex trade show in June. Today’s announcement puts Intel’s money where its mouth is, by making funds available to invest in ultrabook companies. The fund will invest in hardware and software technologies focused on how people interact with Ultrabooks, which will include sensors and touch interfaces. Intel will invest the money from the fund over the next three to four years.

“This is a pretty big deal,” said Roger Kay, an analyst at Endpoint Technologies. “Aside from direct investment of $300 million over five years, Intel has efforts going on in multiple arenas to stimulate this must-win market.”

Arvind Sodhani, president of Intel Capital, the company’s investment arm, said that ultrabooks will be an important part of the $261 billion global computer industry and the fund will be invested in technologies that help morph the personal computer into its next “must have” devices.

Mooly Eden, general manager of Intel’s PC Client group, says that the PC is a “Darwinian device” and that Intel is trying to reinvent mobile computing, much as it did in 2003 with the creation of its Centrino low-power laptop chips.

Intel will power the first ultrabooks this year with its second-generation Core microprocessors. That processor will enable machines that are less than 0.8 inches thick at mainstream prices, Intel says. Those devices will be in the market during the winter.

One of the participants in the Ultrabook program is Lenovo, one of the biggest manufacturers of computers. Peter Hortensius, Lenovo’s Product Group president, said that the new computers will push the boundaries on mobility.