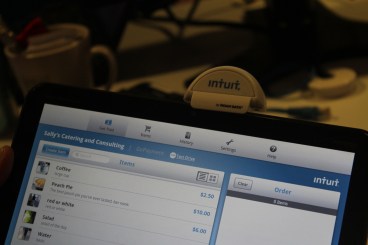 Payments and financial software provider Intuit has its own mobile card swipe reader, but that’s not stopping it from saying card readers’ days are numbered.

For all the development the company has sunk into its reader — two years’ worth, since the company began working on it in February 2009 — Intuit’s payments product manager Christopher Battles told VentureBeat that the card readers will be extinct as soon as a new technology can replace it.

Intuit began distributing those card readers for free along with a pre-paid card for all Intuit GoPayment users in 2009. Whenever a small business swipes a card makes a transaction, Intuit takes a 2.7 percent transaction fee and then delivers the funds to the pre-paid account. The transaction takes a little more than a day to process, Battles said.

Intuit will tell you any day of the week its reader isn’t like Square’s, its main competitor, whose reader plugs into a headphone jack on mobile devices like the iPhone or iPad. Square has garnered lots of hype even though Intuit’s reader was on the market first. Intuit also benefits from its brand recognition as a financial services software company — it also develops popular software like TurboTax and QuickBooks.

Intuit is also placing a bet on near-field communication (NFC), which uses short-wave radio waves to transmit data between devices. PayPal just recently launched an NFC service of its own which lets you you tap together two NFC-equipped Nexus S phones to make a transaction.

“We’re competing with a 7-second transaction time, it’s hard to provide enough features to compete with that,” Battles said. “Near-field communication is interesting, it has a future, but we don’t think we’ve cracked the code on it yet.”

Another product manager on the payments team said the card readers were a short-term game for handling mobile payments.

“The reader is for today, it won’t be true eventually,” Intuit senior product manager Mary Lunnebord told VentureBeat. “And by the time we crack the code on NFC, there will probably be a third technology to replace it — no one can tell what’s going to win out right now.”