Research firms have been tracking iOS 10 adoption since the early minutes of its release, but Apple today finally released the first official numbers. iOS adoption numbers show that iOS 10 has passed the 50 percent mark in less than a month. In other words, the latest version of the company’s mobile operating system is now on one in every two of its devices.

iOS 10 was released on September 13, meaning it took less than four weeks to reach the majority of users that Apple tracks. While this is certainly impressive, keep in mind that iOS 9 took less than a week to hit the same adoption milestone.

These latest figures come from the usage of the company’s App Store, presented on the support page for developers. Apple updates these numbers regularly to help app and game makers gauge which features they can leverage to how many users: 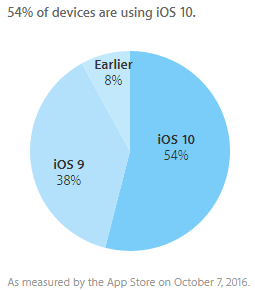 As you can see, iOS 10 was on 54 percent of Apple’s devices using the App Store. iOS 9 has meanwhile fallen to 38 percent, while earlier versions account for just 8 percent.

When iOS 9 passed the 50 percent mark, Apple declared it the “fastest iOS adoption ever.” That likely remains true today, so we’re not expecting a press release from Apple explaining why iOS 10 didn’t see the same success. iOS 8 saw a much slower adoption rate compared to iOS 7 and iOS 6, so Apple unsurprisingly touted iOS 9’s adoption, especially because it was being upgraded to at a record pace.

At the end of the day, the speed at which iOS users upgrade to the latest and greatest is impressive. Other companies can only dream of hitting 50 percent in the ballpark of a week or a month. Users get new features and security improvements, while developers are more likely to use iOS 10-specific functionality. This in turn only encourages more users to upgrade as they seek to get new apps and improvements in existing apps.