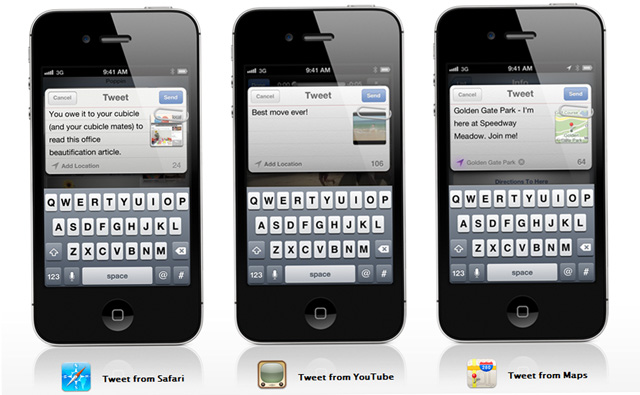 Twitter’s sign ups have soared since the launch of Apple’s iOS 5 operating system last week, with three times as many people now opting into the social network, the company said last night at the Web 2.0 conference in San Francisco.

On top of that, Twitter CEO Dick Costolo revealed that the social network is now serving 250 million tweets per day, an impressive statistic. The company has seen major growth in active users, with 30 percent of its 100 million users logging in every day in January. Today now more than 50 percent log in each day.

Twitter’s iOS 5 integration likely is not only improving signups but it’s almost certainly getting users to tweet more. Twitter integration (as seen above) allows users to tweet from many of the iPhone’s native applications, and tweets show up in the new notifications panel that can be accessed by swiping down from the top of the screen. iOS 5 has been downloaded and installed by an astounding number of Apple owners already, and it’s pre-installed on the record-selling iPhone 4S.

Costolo also apparently has an ambitious scope for how many devices he thinks Twitter can access in the coming years, reportedly saying, “We think that we can be on 2 billion devices around the world, and reach every person on the planet, and the way to do that is through simplifying.”

Twitter has had a strong run as of late, so that sort of growth target isn’t out of the question. In the past few weeks, the service was integrated into iOS, it opened an office in New York City with Mayor Bloomberg on hand and its revenue is now projected to hit $1 billion by 2016.