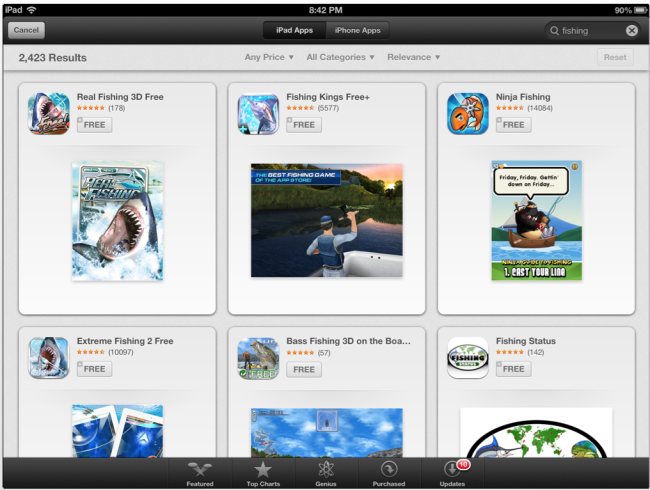 After Apple acquired (and shut down) the app discovery service Chomp, we expected some improvements for the iOS App Store. Now it looks like those upgrades are finally taking shape, thanks to an update to the App Store last night for iOS 6 beta testers.

The big change is the addition of a new swipeable card interface for App Store search results on the iPhone and iPad, which resembles Chomp’s old search interface and replaces the the traditional list view from searches. As the video below from JailBreakNation shows, the new design makes better use of the iPad’s larger display by showing you a screenshot of the app, along with its ratings.

It also looks like Apple incorporated Chomp’s search algorithm into the updated iOS 6 store. The video shows how the same search gets different results on an iPad running iOS 6 and an iPhone running iOS 5.

While great for consumers, the search result changes may force developers to rethink the way they market their apps. It’s particularly important on the iPhone, where users will likely see less search results when flipping through the cards interface, compared to the older list of results.

Apple also turned on its Genius recommendation feature in the iOS 6 App Store update last night, which until now was unavailable to beta testers. I suspect Apple had to tweak Genius to take advantage of Chomp’s algorithms, and for whatever reason the company wasn’t able to do that before iOS 6 beta testing began.

We’ve been hearing quite a bit about how much more elegant the App Store feels in iOS 6, so these improvements don’t come as a huge surprise. I expect Apple to integrate even more enhancements before the official release of iOS 6.