Nine days ago, Apple boasted that iOS 7 would soon be the world’s most popular mobile operating system. Today, the company is beginning to be proved correct.

“Next month, we will ship our 700 millionth iOS device,” Apple engineering VP Craig Federighi said at the new iPhone 5S and 5C unveiling. “And since we make updates easy … iOS 7 will quickly become the world’s most popular operating system.”

Apple does make updates easy, and iPhone owners are famously quick to update — much quicker than Android users.

“About 24 hours following the start of the public rollout, adoption reached levels above 18 percent. This level of adoption … bests the impressive adoption rates of iOS 6 in the same time period last year,” ad network Chitika said. “For some competitive comparison, Google reports that as of Sept. 4, adoption of Jelly Bean, which was released in July 2012, comprises about 45 percent of the Android ecosystem. Judging by past trends, it’s likely that iOS 7 will surpass that mark very soon.”

Here’s a comparison between adoption rates of iOS 6 and iOS 7: 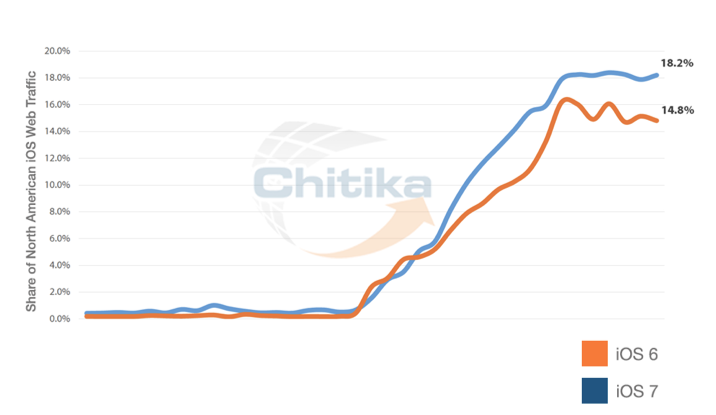 Of course, Apple’s claim that iOS 7 will be the world’s most popular mobile operating system is, while true, a little misleading. Android is by far the world’s leading mobile operating system, having reached the one billion activated devices level fairly recently. The difference is that due to carrier restrictions, locked-down devices, and older hardware, many Android devices don’t get updated to Google’s most recent software releases.

Which, of course, leads to fragmentation in the Android market — which Apple is happy to exploit.

As an ad network, Chitika measures use via individual ad impressions, not by unique users. So it’s not exactly gold-standard research. However, each study typically is based on about 300 million impressions on over 300,000 websites, which randomizes the user pool significantly and makes the results a good general overview of reality.