Apple today updated its iOS adoption numbers to show that iOS 9 has finally hit the 66 percent mark. In other words, the latest version of the company’s mobile operating system is now on two-thirds of its devices.

iOS 9 share (which includes iOS 9.1) has taken less than two months to reach the two-thirds mark, an impressive feat. This is much faster than iOS 8, which gained only 1 percentage point less than a month after its release.

These latest figures come from the usage of the company’s App Store, presented on the support page for developers. Apple updates these numbers regularly to give app and game makers a good idea of which features they can leverage to how many users: 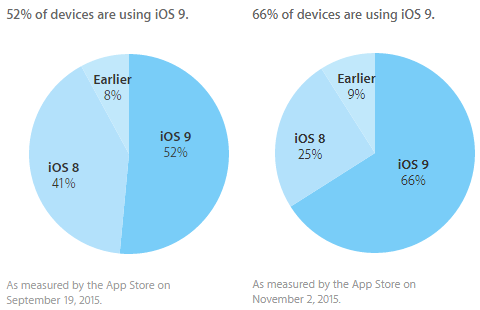 iOS 9’s quick rise means iOS 8 is now on just a quarter of devices (25 percent exactly). In the last 48 days since its release, iOS 9 gained 14 percentage points, while iOS 8 fell 16 points. Note there is a small discrepancy in Apple’s first chart: The numbers add up to 101 percent.

Either way, Apple declared that iOS 9 was the “fastest iOS adoption ever, with more than 50 percent of devices already using iOS 9.” Whether it was 51 percent or 52 percent isn’t a big deal.

Because iOS 8 saw a much slower adoption rate compared to iOS 7 and iOS 6, it’s no surprise Apple is touting iOS 9’s gains. Aside from being wary of bugs and not being impressed with the feature set, the size of the update itself (grabbing it over the air requires about 5GB of free space on your device) was the big sticking point.

Apple cut down the update size of iOS 9 to around 1.3GB. That’s less than a third of what it asked users to download when moving to iOS 8, which took six months to hit 75 percent adoption. iOS 9 will likely get there much, much faster.

The result is developers will be more likely to use iOS 9-specific features. This in turn only encourages more users to upgrade as they seek to get new apps and new features in existing apps.