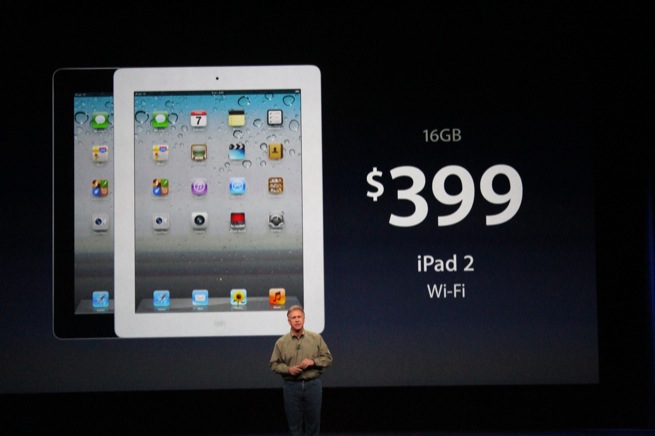 Apple has announced at its new iPad event that the extremely popular 16GB iPad 2 tablet will now retail for $399 for the Wi-Fi version and $529 for the 3G-enabled version.

The new third-generation iPad that was just introduced will include a lot of things the iPad 2 does not have, including a higher-resolution Retina Display, 4G LTE wireless networking, and a quad-core graphics chip.

But the cheapest model of the new iPad will run $499, a far cry from $199 Android tablets like the Amazon Kindle Fire and Barnes & Noble Nook Tablet. So the new $399 iPad 2 will help get consumers a little closer to that ultra-low price point.

The move mimics Apple’s prior decisions to sell older models of the iPhone at a lower price. AT&T, for example, still sells the iPhone 3GS and iPhone 4 on contract but for a lower introductory price.