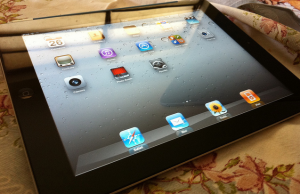 Tech and financial analysts are making statements today about Apple and what they say is the imminent launch of the next iPad.

Susquehanna Financial Group’s Jeffrey Fidacaro and Christopher Caso each published notes today on Apple. Caso specifically stated in his missive that as many as one million iPad 3 units could be built between now and the end of 2011.

Fidicaro stated his projections for the current crop of iPads; he concluded that Apple shipped 11.5 million iPad units in the third quarter of 2011 and that the company will likely hit 13 million iPads shipped for Q4.

Earlier this year, Apple had to discuss some disappointing sales figures for the iPad 2. For the second quarter, the company shipped just 4.69 million units — far less than projections, which had ranged between 6 and 8 million.

However, the company denied this low figure had anything to do with consumer demand. “We sold every iPad 2 we could make,” said Apple CFO Peter Oppenheimer at the time, indicating that the supply chain was, in fact, the problem.

Then, last month, we learned that Apple had actually reduced the number of iPads it was ordering from manufacturers. Analysts at JPMorgan stated this was because the company was shifting its focus and resources to the next generation of its tablet, the iPad 3.

The iPad 3 will be manufactured not in China or Taiwan, but at a Foxconn Electronics manufacturing plant in Brazil. The plant is likely a joint venture between Foxconn, which put up an initial $15 million investment, and the Brazilian government.

The iPad 3 is rumored to launch in the beginning of 2012.