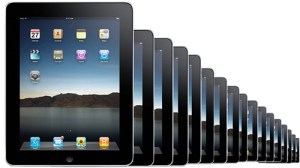 It’s time for yet another installment of unconfirmed Apple iPad 3 news — although the latest crop of rumors does sound like a practical scenario for the company’s next tablet.

In terms of aesthetics, the next iPad may look nearly identical to the current model and could feature the same home screen button and dock connector, according to a report from Japanese blog Macotakara. The only significant difference to the appearance would be the tablet’s slightly thicker body. If true, this means some iPad 2 body cases will probably be incompatible.

The report also indicates that the majority of changes in the iPad 3 are significant upgrades to hardware components inside, such as a faster A6 processor, better front and rear cameras and an enhanced 2048-by-1536-pixel resolution screen produced by Sharp. This move would mimic Apple’s decision to release an interim iPhone 4S with component upgrades rather than a fully redesigned iPhone 5 .

Apple contract manufacturers Foxconn Electronics and Pegatron Technology are allegedly scheduled to begin assembly of the iPad 3 soon to fulfill an early March launch deadline, according to Macotakara. While the manufacturer fulfillment dates (as well as information about the Sharp screen) fit earlier reports about the next generation iPad launch date, this latest report doesn’t mention anything about Apple producing two iPad models.