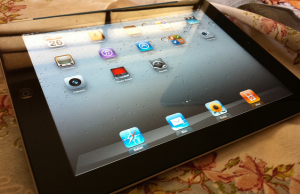 Wednesday, March 7 is the date covetous Apple fans can finally catch their first real glimpse at the much-ballyhooed iPad 3, according to a new report.

Citing reliable sources, iMore editor-in-chief Rene Ritchie declared that we can expect Apple to unveil its newest tablet on the first Wednesday in March. The day aligns with past Apple media events and matches the early March timing AllThingsD reported last week.

“Along with the 2048×1536 Retina display, the iPad 3 will feature a quad-core Apple 6 system-on-a-chip, and possibly 4G LTE networking,” Ritchie said.

We’ve suspected for some time that the iPad 3, should it be called that, will feature a faster processor, faster graphics, and a retina display.

Perhaps more interesting is that Apple will once again (coincidentally?) reveal its latest touch-based machination just days ahead of South-By-Southwest Interactive, the annual Austin gathering of industry insiders and wannabes.

Last year, the beloved device maker lifted the veil on the iPad 2 a week prior to the geeky affair and started selling the device during the show. News and online buzz surrounding the remake of Apple’s category-defining device easily eclipsed that of the conference and out-shined launching startups, keynote addresses, lavish parties, and so forth. One year later, Apple could easily do the same — should it choose to release the iPad 3 during SXSW Interactive again. The launch date, however, is still unknown.

But now that the big reveal is less than one month away,gossip about what features the device will include will intensify and maybe, if we’re really lucky, we’ll get a few early leaks.