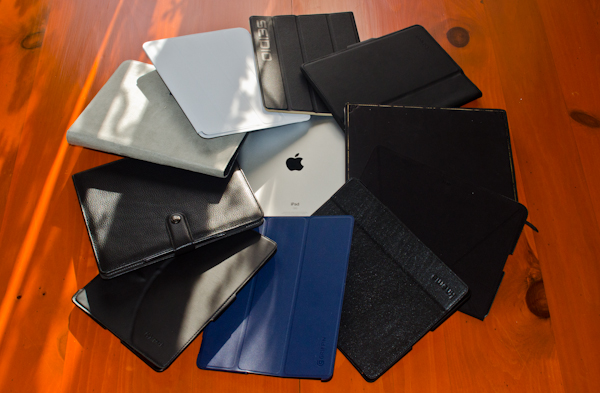 The iPad is a powerful tool, but it’s also not meant to go in public naked. Apple’s stated as much by making a case, and then the Smart Cover for the second generation iPad. And it makes sense — even though the iPad is a beautiful looking tablet, it’s a fragile one at that, and is designed to be used at different angles, in different positions, and not just flat on a table or in the hand. Thus, the need for a case was born.

But it’s more than that. While the iPad is a status symbol, the case it wears is an even stronger one. Were you hustled into buying at Best Buy, or is yours a sleek case that defines who you are and what your iPad is used for? After all, it’s not called a case for nothing: it makes a case for the type of person you are, and how you dress that most important — and stylish — tablet computer.

Beauty is just as important as function in this roundup though, so all of the ten cases underwent rigorous testing for both everyday use and pizzazz. Which is the best for you? Read on and find out.

Typical iPad cases are made out of cloth, such as polyurethane or leather, and are generally pliable and easy on the hands. They’re also thick yet light, don’t have that techy-look of shiny, glossy gadgets, but aren’t as clean-cut. Cloth, by and large, is the standard for iPad cases. They offer adequate protection from minor damage, but won’t protect much from a serious drop.

Apple’s very own iPad case, aptly labeled the Smart Case, is a simple mix between the current Smart Cover and the original iPad’s cloth case. Unlike the case used for the original iPad, the Smart Case doesn’t fit so snug on the iPad 2 or iPad (2012). Users snap the iPad into the hard shell, and a Smart Cover protects the edges of the glass. The case holds the iPad steady, but it isn’t a perfect fit.

Beyond that, the cover doesn’t snap exactly into place, from one end to the next. It isn’t sized perfectly, a strange change of pace for Cupertino, which allows the cover to not close properly half the time. More of a nuisance than anything else, this coming from a company that specializes in making products perfect solely in terms of end-user experience is surprising.

Even then, the Smart Case is a very solid case for the iPad. It’s thin, comfortable to hold across or upright, and even with the annoyances is much better to use on a daily basis than the Smart Cover. It looks sleek, but isn’t an upgrade from the actual iPad itself.

The Smart Case is thin, but not this thin. Seidio’s Expert combines the Smart Cover a very thin synthetic leather case and a unique sticker that keeps the iPad in place, instead of additional cloth or something else to stabilize it. The Clean-Grip adhesive pad on the back is designed to withstand up to 700lbs. of force; in the company’s promotional video for the case, a guy drags a car in neutral with the case attached to the hood. Serious stuff, especially considering that the iPad weighs less than 1.5lbs.

Then again, seeing a $500 tablet hang from a case with no support can be unsettling. But it’s entirely safe; the adhesive is remarkably strong, so the worry is completely psychological. Setting the iPad properly is more of a challenge, and the case would be much improved if a stitched outline were on the cover for placement direction. Properly aligning the iPad for the camera hole and so the case closes properly is a bit too troublesome, especially since removing it from the Clean-Grip panel is much harder than it looks.

I found the Expert to be a very charming case, except that using a powerful adhesive, while clever, looks almost cheap when open. If the iPad had flat edges like the original, this case would look far less alien, but the tapered edges of the tablet makes the whole thing just look strange. Still, it looks perfectly normal and fairly stylish closed. Open her up though and the iPad’s rounded edges bulge out inappropriately.

As the thinnest and lightest iPad case tested, the iPevo Origami is remarkably cheap and effective. The cloth corners sticking out from the edges and simplistic design don’t do the case justice, which does almost everything the competing cases do at half the cost. It works as a smart cover and folds, as the name suggests, like origami to hold the iPad upright or at an angle by bending the cover flap into shape. Properly bending the cover takes some getting used to, but once you are it’s as easy and convenient as Apple’s tri-fold design.

The thin profile and comfortable cloth give this case a nice, solid feel, especially when holding it with one hand. The Origami even covers the home button, and clearly has no regard for the aesthetic design, but it offers additional protection to the case by covering everything but the actual display. The entire glass bezel is covered, which helps keep it clean and makes the iPad more comfortable to hold from both the front and back. So what it lacks in looks, the Origami makes up for in practicality.

Of the tested cases, the WanderFolio Luxe is the most diabolically expensive. At $130, it’s more than triple the cost of some of the less expensive cases, but it’s also the most fully-featured standard case. Not only is the Luxe leather-bound and thick for great feel and protection, it comes complete with a six hideaway pockets right in the cover for carrying whatever you need, from paperwork to money to credit cards. I personally wouldn’t trust keeping secure documents in an iPad case, but in this day and age of carrying all of your belongings in just pockets sans bag, why not.

The WanderFolio’s thick frame feels very solid in the hand, both open and closed. The leather has excellent grip and is quiet and almost elegant, while the inside of the cover is felt for easier grip. It all snaps shut with a small magnetic latch. And instead of relying on the cover to stand the iPad upright, the WanderFolio has a piece of the case which disconnects from the tablet and acts as a support. This keeps the iPad standing at anything up to a 40 degree angle, but any higher up and the case slips.

The Luxe is expensive, so Speck offers a lower-priced yet nearly identical model named the MagFolio Luxe for $100, with the same great leather but no pocket. There’s also the $60 MagFolio and $70 WanderFolio which use thinner, lower-quality leather, which are otherwise identical models.

1 2 3 4 View All
Want must-read news straight to your inbox?
Sign up for VentureBeat Briefings
View Briefings