Apple said in October that 93 percent of Fortune 500 companies have deployed or are testing iPads, an incredible feat considering that big businesses generally take forever to incorporate new technology into their workflows.

Enterprises deploy technology slowly because they tend to plan methodically and for the long term. In most situations, the IT departments and managers are the ones calling the shots. They think they know what’s best when it comes to incorporating tech and they want control over how that tech works.

But the iPad is different for some reason. Many organizations are seeing employees rebel and bring iPads into the fold without IT approval. It’s often a situation of “it’s easier to ask forgiveness than to ask permission.”

At VentureBeat’s recent CloudBeat 2011 conference, LiveOffice CEO Nick Mehta even said, in many cases, it’s the CEOs who bring in iPads from home and force the IT department to step in line. You could argue, as Forbes contributor Tom Taulli has, that the iPad is “corporate bling for executives.” The execs and their underlings go around IT because the iPad is just so cool.

Aaron Freimark, IT director at Tekserve, one of the oldest companies providing support for consumers and businesses using Apple products, agreed to walk me through the challenges that IT departments and executives are currently grappling with when it comes to the iPad.

I sought out an IT expert to walk me through the challenges that IT departments and executives face regarding the iPad. Aaron Freimark, IT director at Tekserve, agreed to help me out. Tekserve is one of the oldest companies providing support for consumers and businesses using Apple products, and it’s equipping many businesses in New York City with iPads. Freimark offers a unique perspective, as he is only one of a handful of people certified by Apple with Mobility Technical Competency (MTC), a title conferred to members of the Apple’s Consultants Network who are qualified to deploy iPads and iPhones on enterprise networks.

The biggest issue for IT managers when it comes to deploying the iPad, according to Freimark, is ceding control. With Windows and Mac desktops and laptops, the operating system itself provides a wealth of ways to control what employees can do. Modern Windows and Mac OSes and apps that have been created for those OSes can allow IT to wipe the machines, log in remotely, push software patches, and update software while retaining data contained inside that software.

But iOS, which runs the iPad and iPad 2, doesn’t work like other OSes. It’s still relatively young, with Apple only releasing the first version of iOS on the iPhone in June 2007. iOS is made to be more simple and it’s designed for multi-touch devices, not for standard desktops and laptops. While it offers some tools for IT control, it’s not as complete as most tech managers want. Whether Apple just hasn’t caught up to what IT managers want or control is given up by design, it’s easy to argue that there are gaping flaws.

“The IT people responsible for compliance don’t see it easy to use for their purposes, including security and control,” Freimark said. “IT workers have been trained to want to control systems. There is a limited amount of control you can have on the iPad.”

In its current state, an iPad running iOS 5 (the latest version) cannot be issued software patches, cannot prevent users from updating software to the newest releases, cannot provide direct screen-sharing for troubleshooting issues. Maybe most importantly, IT can’t push a pre-set “image” of configured apps with pre-installed data. All of these factors make for a somewhat scary proposition when it comes to deployment.

“With this setup, you’re not running an IT department that is updating en masse,” Freimark said. “You’re becoming more of a support organization.”

However, when you go into the nitty-gritty of actually setting up an iPad for the enterprise, there is a surprising amount you can do without putting in much effort. For example, when you connect an iPad to a Microsoft Exchange server account and ActiveSync, an IT manager can remotely wipe the device, enforce passcode policies to add security and turn off the camera. Those important basics, which have been available since the iPad’s debut, help managers sleep easier. If a work-issued iPad full of sensitive data goes missing, the IT department can at least completely erase the thing.

There are also many companies that specialize in the area of mobile device management that give the iPad more IT options, including Sybase, SOTI, MaaS360, BoxTone, AirWatch, Mformation and Zenprise. These companies can add additional layers of control for the iPad when it comes to things like app management, scalability and data export.

Use cases and apps 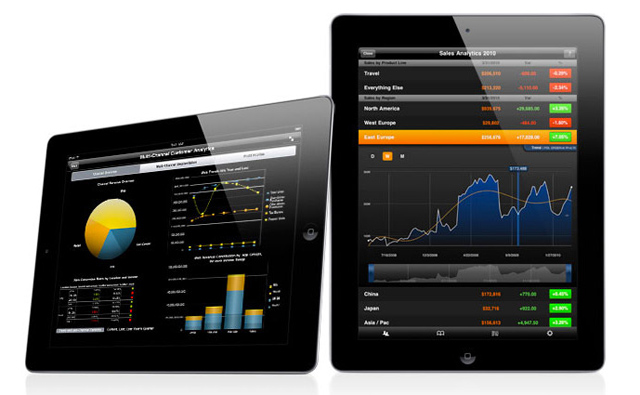 OK, so the iPad is frustrating for the IT department and they have to give up the level of control they normally have. It is worth the caveats? It’s a resounding yes, says Freimark, who uses an iPad to help run intensive parts of his own company. He says the simplified applications and touch display make work fun while also maintaining strong productivity.

There are more than 7,300 business-focused applications currently available for the iPad, and many of them are good-to-excellent touch-based versions of their desktop counterparts. High-quality applications for business include:

Microsoft is reportedly working on official Microsoft Office applications for iPad for 2012. That said, Quickoffice, Documents to Go and Apple’s own iWork already offer document, spreadsheet and presentation editing functions that vary from mediocre to great.

Some companies are also using internally made applications on the iPad. One company making those internal iPad apps secure is Sunnyvale, Calif.-based startup Bitzer Mobile, which offers what it calls a “secure container” to run native and HTML5 apps. Bitzer’s software handily allows for the isolation of enterprise apps so parent companies can remote wipe or change data inside the apps without affecting any personal assets on the iPad.

Cultural shifts and what’s next for the iPad at work