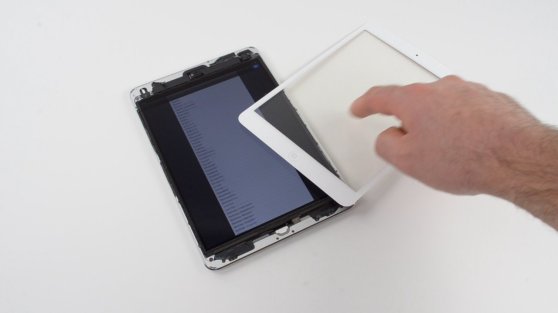 iFixit has cracked open the iPad mini to see what’s inside.

As with previous Apple tablets, the iPad mini underscores Apple’s love for glue, which iFixit says made the teardown a bit difficult. This is one area where devices like the Nexus 7 and Kindle Fire triumph over the Apple tablet, iFixit says.

And speaking of the Kindle, Amazon might not be happy to hear that the iPad mini does, indeed, have stereo speakers. Amazon made waves last week when it used its homepage to trash the Apple tablet, which it said had a single speaker. But that claim is wrong, according to iFixit, which says the iPad mini’s use of the Lightning adapter allowed Apple to cram another speaker into its chassis.

Surprisingly, the teardown also revealed a Samsung-made LCD, which confirms Samsung’s claim that it’s not moving away from creating displays for Apple devices.

So far iFixit doesn’t seem to have made up its mind on the overall repairability of the iPad mini; it’s still showing a “? out of 10” on the Repairability scale.