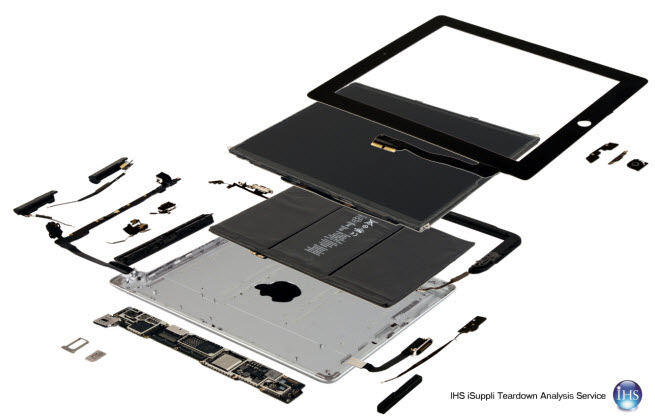 The new iPad costs about $364.35 for its bill of materials, according to a teardown analysis by IHS iSuppli.

The tablet also costs $10.75 to manufacture, raising the total production cost to $375.10. That means that Apple makes a handy profit on every machine that it sells for $499 or more, in keeping with the company’s policy of pricing its hardware to make profits. The cost likely gives Apple considerable advantages over rivals trying to enter the business. The teardowns also reveal who the winners and the losers are among chip and component makers.

IHS iSuppli notes that the estimates account for hardware and manufacturing costs only and do not include additional expenses such as software, licensing, royalties or other expenditures.

The new iPad is more expensive to produce than the iPad 2 at the time of its launch, even though the retail prices are the same. The 32-gigabyte LTE model costs 9 percent more than an iPad 2 with 32 gigabytes and 3G wireless ($335). Higher costs include the addition of the high-resolution Retina display, 4G LTE wireless, and a larger-capacity battery.

The new iPad is more expensive to produce than the iPad 2 at the time of product launch, even though the retail price points are the same. The 32GB LTE model’s BOM is nearly 9 percent higher than an iPad 2 equipped with 32GB and 3G wireless, which carried a cost of approximately $335 at the time of product launch. Major factors driving up the BOM include the addition of the high-resolution Retina display, LTE wireless and a larger-capacity battery. 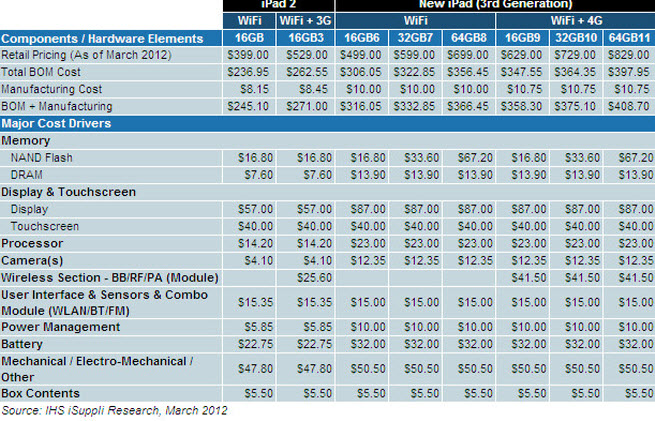 Samsung is the big winner with the new iPad. It supplies both the display and the A5X applications processor. The display is the most expensive item in the machine, costing $87, while the applications procesor costs $23. That gives Samsung a 30.2 percent share of the 32 gigabyte LTE version of the tablet.

The NAND flash memory (the 32-gigabytes) was supplied by Toshiba in the unit analyzed, but Samsung is also a supplier of these parts. Counting the $33.60 cost of the NAND flash, the units where Samsung supplies the flash give it a total $143.60 share of the cost, or 39.4 percent of the bill of materials. Hynix also provides NAND flash. IHS also believes Samsung supplies the battery, but isn’t sure yet.

“The Retina display represents the centerpiece of the new iPad and is the most obvious enhancement in features compared to previous-generation models,” said Andrew Rassweiler, senior principal analyst, teardown services, at IHS. “The first two generations of the iPad employed the same type of display—a screen with resolution of 1,024 by 768 pixels. For the third-generation new iPad, Apple has taken a significant step up in display capabilities and expense, at four times the resolution and 53 percent more cost.”

The iPad 2’s screen cost only $57. Apple reportedly has three sources for the display: Samsung, LG Display, and Sharp. The touch screen portion of the iPad costs $40, or 10.9 percent of the total cost. The main suppliers are still TPK, Wintek and Chi Mei.

The wireless section costs $41.50 and accounts for 11.4 percent of the cost. As 4G LTE is more expensive, it costs more than the $25.60 wireless section of the iPad 2. The winner here is Qualcomm, which supplies the MDM9600 baseband processor, which provides the LTE wireless data networking.

Apple itself designs the A5X processor, which is 6.3 percent of the total bill of materials. Samsung is the foundry, or contract chip manufacturer, and so Samsung likely commands a lower margin on the device. The flash memory is where Apple makes its money.

“The NAND flash memory is one of the key profit-generating components for Apple in the new iPad line, as it has been in previous iPads and in the iPhone family,” Rassweiler noted. “Apple makes far and away more money in selling consumers NAND flash than NAND flash manufacturers make selling it to Apple. And the more flash in the iPad, the higher the profit margin there is for Apple.”

The new iPad camera module design is the same as in the iPhone 4. The two cameras in the tablet cost $12.35, or 3.4 percent of the bill of materials. The new battery is a lithium polymer model that supports 42.5 watt hours, up about 75 percent from 25 watt hours in the iPad 2. But because prices have fallen in the last year, the new battery is only 40 percent more than the old one. The cost is $32, compared to $22.75 for the iPad 2 battery.

iFixit mentioned that Broadcom supplies the BCM 4330, which handles WiFi and Bluetooth.