Measured by total unit sales, Apple’s iPads aren’t facing real competition from Microsoft’s Surface tablets. Apple has sold well over 400 million iPads, while Surface sales are loosely estimated to be under one-tenth that number — less than 40 million. The difference is that iPads have become ubiquitous for multiple purposes, while Surface tablets have found a niche, enabling dedicated PC users to run Windows desktop and laptop apps on smaller, generally convertible devices.

This week, a rumor circulated that Apple is planning to release its own iPad trackpad and keyboard accessory this year — a development I’d characterize as not only plausible, but inevitable. But such a product only makes sense if Apple is planning a larger push to win over Surface Pro and Windows users.

Apart from the challenges of designing and pricing a combined trackpad/keyboard accessory for mass consumer adoption, there’s little question in my mind that Apple will also have a new software push — including both iPadOS 14 and macOS Catalyst — to inspire developers to make use of the feature. Here’s how I think it’s all likely to play out.

As much as the accessory’s functionality seems obvious, its form is a question mark. Patents suggest that Apple has explored either touch-sensitive physical keys or a second glass surface as a merged alternative to a dedicated trackpad. Yet there’s a greater likelihood that it will use a traditional physical keyboard above a rectangular area specifically for multi-touch input and button presses. This is the input system professionals want, and at a price point in the $249 range, give or take $50, likely the only one they wouldn’t complain about. 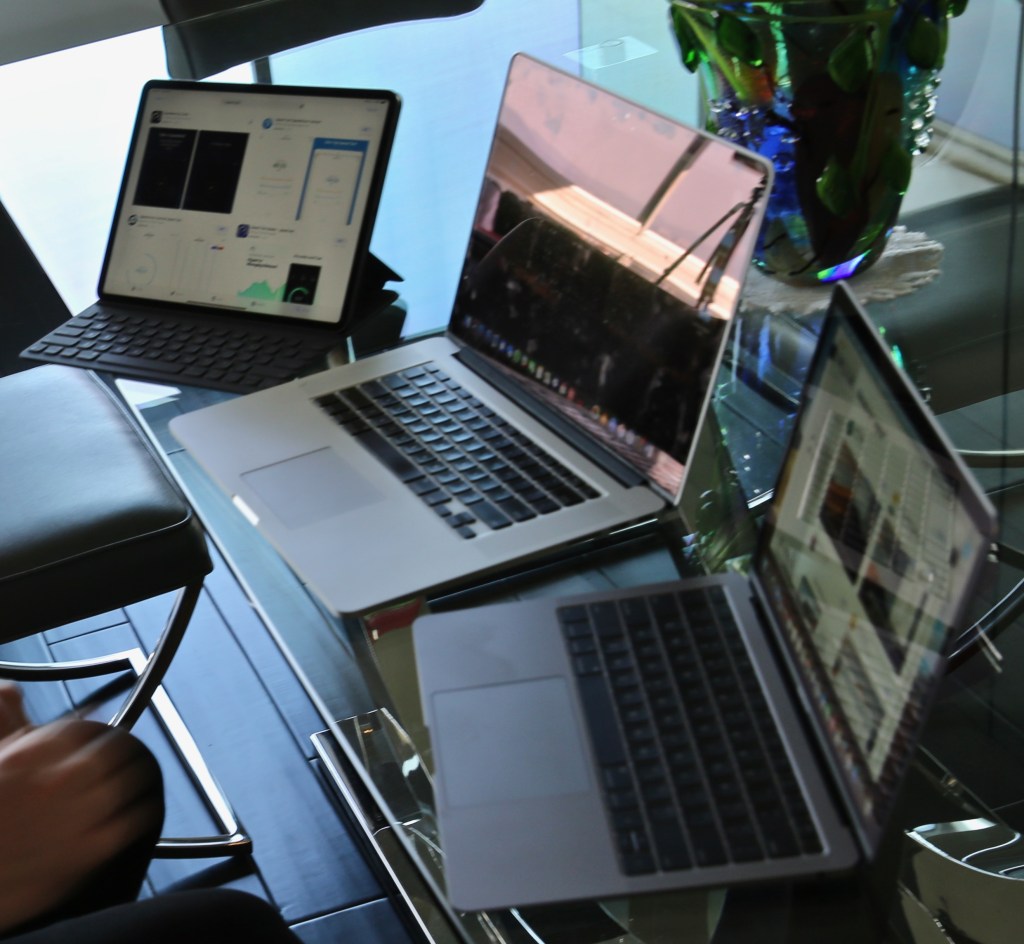 Above: A 12.9-inch iPad Pro with a Smart Keyboard Folio next to a 15-inch MacBook Pro and 13-inch MacBook Air.

I’m not pulling that crazy price range out of thin air. Apple’s current Smart Keyboard Folios for the iPad Pro feel ridiculously overpriced at $179 (11-inch) and $199 (12.9-inch), an insane amount to pay for a plasticky keyboard. Apple’s wonderful Magic Trackpad 2 for Macs sells for $129 on its own, and though a combined accessory wouldn’t offer an equivalent experience, those prices provide a sense of what the company thinks its input solutions are worth.

Soon after iPadOS 13’s release, Brydge revealed a $199-$229 combined keyboard and trackpad accessory that makes an iPad Pro look like a MacBook, but it apparently won’t deliver units to customers until late April. Critically, the metallic Brydge solution has its own iPad-holding hinge and a different approach to iPad protection (read: none) than Apple’s vinyl “smart” folios. Many Mac users would find these choices completely acceptable as an alternative to carrying a MacBook. 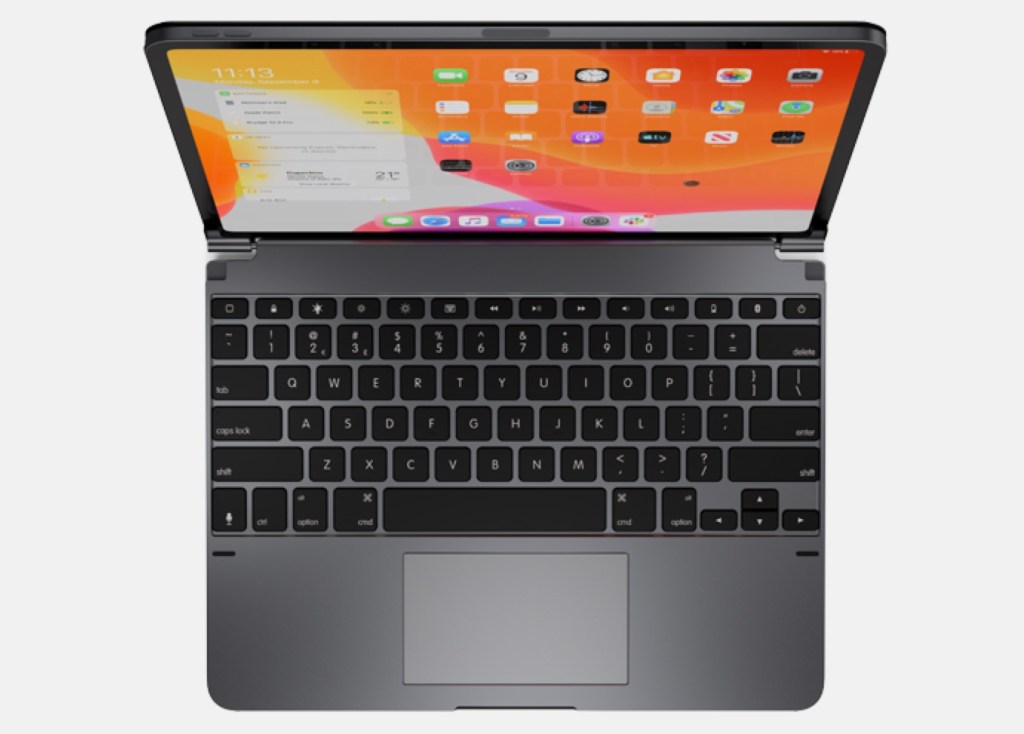 It’s worth noting that Microsoft’s Surface Pro Type Covers deliver much of the same functionality as the proposed Apple trackpad/keyboard for only $130-$160, using a combination of plastic and fabric. But since Surface tablets have their own kickstands, Microsoft’s accessories don’t have to support the device’s weight. Apple’s solution will need to simultaneously prop up the iPad and have room for a trackpad, which implies the use of a sturdy hinge, and thus a more expensive resulting accessory.

Superficially, iPadOS 14 won’t need to change much from iPadOS 13 to support this trackpad accessory. iPad users can already go into Accessibility settings, navigate to Touch > AssistiveTouch, and use either USB or Bluetooth input devices with a circular on-screen pointer. No additional setup is required, and customizations such as tracking speed, pointer size/color, and button features are available.

But there’s more to the iPad software story than just enabling pointer access by default rather than using an Accessibility switch, or switching to a more traditional-looking arrow pointer. Some people will hope to run Mac apps on iPads this year, just as Windows users can access PC apps on Surface tablets.

On one hand, that concept seems almost laughable at this point given how publicly intransigent Apple has been about merging its mobile and Mac platforms. Users have begged Apple since the iPad’s earliest days to produce a dual-booting device with iOS and macOS capabilities, or a hybrid device that could run both Mac and iPad apps. Time after time, company executives have long maintained that it’s not happening — at least, not in a brute force (run raw Mac apps on iPad) way — and effectively told users to get used to “desktop-class” iPad apps that are subsets of Mac versions.

However, Apple’s Catalyst initiative provides developers with another alternative: create hybrid apps with a common Mac-iPad code base, then offer platform-optimized UIs for each device. Until now, the premise has been to help grow the Mac’s software library by bringing over iPad apps. But it could also go in the opposite direction, enabling the iPad to run some Mac apps, specifically ones that have been coded using Apple’s latest development software.

If enough critically important Mac apps were ported to the iPad, perhaps that would sate some people. But for a variety of reasons, it’s hard at this point to imagine a truly full-fledged Final Cut Pro X running on the iPad Pro under iPadOS, rather than some significantly stripped-down “core” version with the same name.

Thus far, there’s little evidence that Apple is willing to entertain the brute force option, namely, enabling an iPad to run unaltered macOS apps using emulation. The processor and battery demands would be high, and if the performance hiccuped, users might complain. Historically, Apple generally errs on the side of doing nothing if the alternative is an unacceptably janky user experience, so if running Mac apps would choke an iPad, it won’t happen.

Apple’s next-generation processors might be powerful enough for emulation. Current-generation iPad Pros already have A12X chips that are capable of raw performance in the same range as MacBook Pro laptops, but they can’t run raw code written for Macs with Intel chips. Just as Microsoft did with ARM-based versions of Windows, Apple is believed to be working on an ARM-specific version of macOS and ARM-specific versions of its apps for ARM-based Macs, which most recently are projected for 2021. 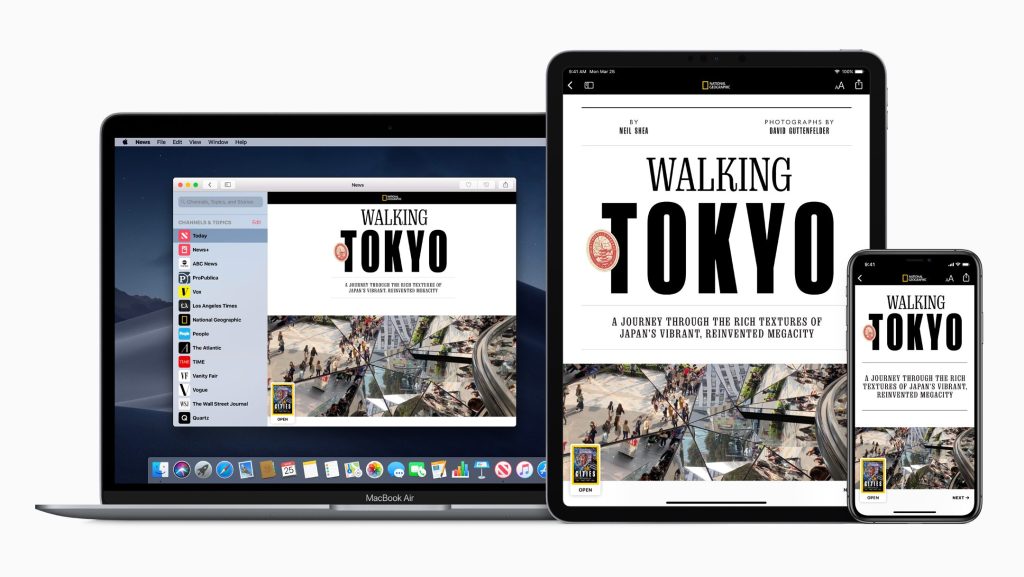 Until then, there will be (much) faster A14X chips in 2020 iPad Pro models, and Apple could use them as a testing ground for emulating some Intel Mac apps ahead of the Intel-to-ARM transition. I think many iPad/Mac users would rejoice just to have this option, even if performance wasn’t perfect, since it would enable a lot of desktop/laptop-class software to become usable on Apple’s tablets. But Apple may well consider this dilutive or confusing given its past iPad marketing.

Based on Apple’s track record, the most likely outcome this year is as follows: Apple will indeed release supercharged iPad Pros, yet continue to encourage Mac developers to make their apps run on both platforms (rather than supporting emulation), then charge users a high price for the accessory that makes the iPad more Mac-like — without delivering a truly Mac-equivalent experience. This would once again leave Surface tablets and Windows with an advantage, but if more Mac developers get on board, continue the slow erosion of traditional computers at the iPad’s expense.

I’m hoping for a bolder move from Apple this year, but then, I’ve had that hope for the better part of the past decade, and iPads still haven’t bridged the laptop-tablet divide like Windows devices. We may have reached the point where the chips, software, and accessories are finally all ready (from Apple’s standpoint) to make a transition, and if so, this could be a game-changing year for iPad Pro users. If not, Microsoft and its partners will have another chance to hold onto or expand their market share, as more powerful hybrid devices and ARM-based “always connected” PCs are en route and looking better than ever.