In spite of all the talk that Apple is ceding both tablet as well as smartphone market share to Google’s Android, iPad web browsing share just hit a five-month high.

iPad usage share increased to 82.4 percent, mobile advertising platform Chitika said today. That’s the highest since the very beginning of 2013, right after the Christmas shopping season, and a recovery from a slight dip in April.

I’m a little shocked, frankly, and I just have to say it: The chart comparing iPad to other tablets is just plain ridiculous. 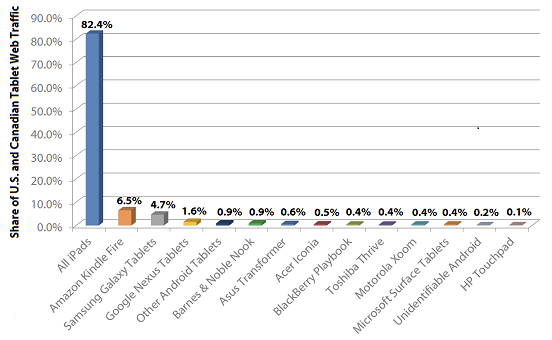 Above: iPad vs everyone

This is not a first and second and third scenario — this is a blowout where one product has just absolutely devastated the field. Amazon’s Kindle, which is sold just at or below cost as a digital-content Trojan horse for Amazon, has barely squeaked out 6.5 percent browsing share, and Samsung’s Galaxy tabs are even lower.

Everyone else, including Google’s Nexus tabs? Just over 6 lousy percent.

I follow Apple closely as VentureBeat’s Apple correspondent, and even though these numbers are pretty much in line with what I’ve seen previously, I was shocked by them today. The global blitzkrieg of Android on phones and the massive number of Android retailers pushing tablets that analysts say will hit 60 percent market share this quarter are a drumbeat of Android boosterism that makes you think Google’s open-source mobile operating system is going to win everything.

For more on learning where users — aka potential customers — are and are behaving on the mobile web, check out the “Digital lifestyle: Curating context in a connected world” track at VentureBeat’s MobileBeat conference, July 9-10.

“While there are a number of players in the tablet marketplace, Apple clearly dominates the market and managed to increase its usage share lead this past month,” Chitika said, speculating that increased sales of refurbished models in advance of expected new iPad versions created the growth.

Apple has actually grown iPhone market share in the U.S. as well, faster than Android.

Android tablet usage share is so low, Chitika had to break out a section of the graph to highlight individual manufacturers. Amazon and Samsung, of course, lead the charge, while Google’s Nexus units, the Nook, the Asus Transformer, Acer Iconia, and BlackBerry Playbook nose around on the floor for the crumbs of the tablet market. 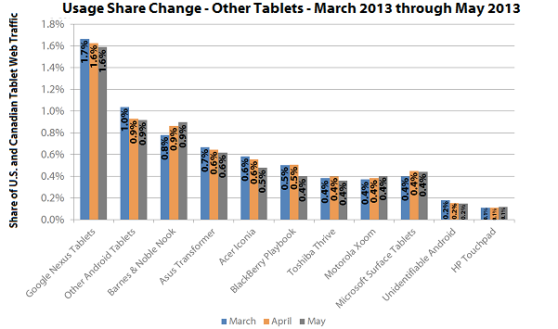 One caveat: This is U.S. and Canadian data only. Global share is likely different.

The North American numbers, however, might serve to Amazon pause. The massive e-commerce company is banking on the Kindle for media sales such as apps, books, movies, TV shows, and more. But while Apple is earning $20 billion a year off its digital media business, Amazon is far, far behind.