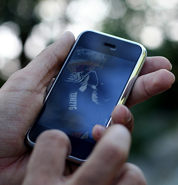 On July 11, the iPhone 3G successfully launched in 21 countries around the world. After some initial launch blunders, like the massive activation system outage here in the United States, it’s now selling like crazy, but Apple is finally starting to catch up with demand. And it will launch in seven new countries later this month. [Update: It will actually be 20 new countries, see the bottom.]

On August 22, Romania, Philippines, Hungary, Czech Republic, Estonia, Poland and India are all set to get the device. A wide range of carriers are handling the launches in each country.

AppleInsider has even more details for each country.

India obviously has the most potential for Apple, since the country has over a billion people. Bharti Airtel and Vodafone combine to serve over 100 million customers alone in the country. The only country in the world with a higher population, China, still has no set plans to release the iPhone, although talks are still thought to be underway with Apple.

Apple plans to make the iPhone 3G available in some 70 countries over the next several months.

Update: You can add 13 more countries to the 7 reported earlier. Included as well:

Argentina, Chile, Columbia, Ecuador, El Salvador, Guatemala, Honduras, Paraguay, Peru and Uruguay. All of those will be handled by America Movil with some gaining access through Telefonica as well.

Latvia and Lithuania will be getting the device as well with TeliaSonera as the carrier. Slovakia will be handled by T-Mobile and Orange.

SetteB.IT made the nifty graphical representation of the expansion below. 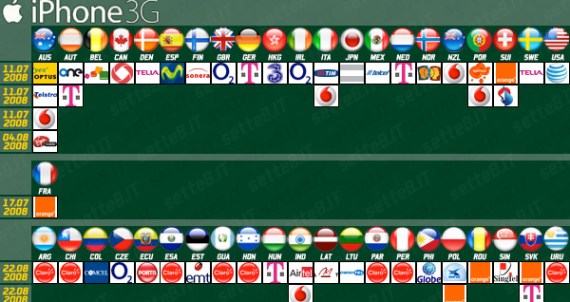 Thanks to all those who sent this in.