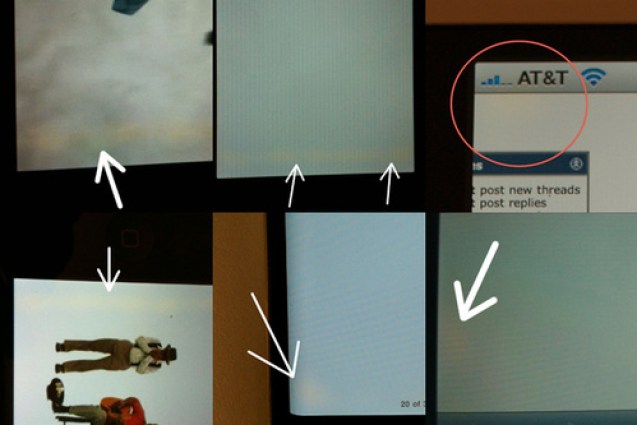 All is not well for lucky iPhone 4 owners who received the device early. Some are reporting that the device’s high-resolution Retina display is showing yellowish discoloration in the form of spots and banding. Others have noticed that if they hold the device’s antenna band (the metallic band connecting the front and rear of the phone) in a certain way, they can force the phone to lose reception (see video below).

The gadget blog Gizmodo put out a call to its readers to see if they could replicate the issue — and they did. At the time of this post, 15 readers are reporting screen issues of their own, and 16 are showing variations of the antenna band problem. Apple Stores have replaced units for customers with screen issues, but Apple has yet to acknowledge the reception problem. Some users say that they can still place and make calls when they force their iPhone 4 to display low reception, so it may just be a software bug that Apple can fix with an update. MacRumors also dug up a video from last year showing the same issue with an iPhone 3G S, so perhaps this is an existing issue that’s just more pronounced now.

I received my iPhone 4 today, and luckily I don’t appear to have any screen discoloration issues. I can, however, replicate the antenna band problem, although it doesn’t seem to affect my ability to make calls. In fact, in my usage of the phone today across Manhattan, I didn’t see a single dropped call — compared to my usual 50 percent dropped call rate with my iPhone 3GS.

One of Apple’s biggest smartphone competitors, the Android-powered HTC Evo 4G on Sprint, saw screen problems of its own shortly after its release. At the very least, iPhone 4 owners can no longer gloat about their new phone’s perfection.

There’s no telling yet how serious these issues are, but I expect we’ll see an official statement from Apple soon.