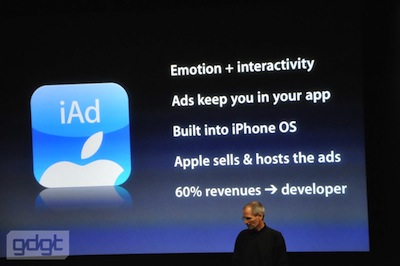 Apple revealed its plans this morning to get more directly involved in the mobile advertising business. It announced a new service called iAd, which is built into the upcoming version 4.0 of the iPhone operating system.

The announcement — — made at a press conference at the company’s headquarters in Cupertino, Calif. — comes as no surprise, since this was clearly Apple’s intention when it acquired mobile advertising company Quattro Wireless earlier this year, but today was the first time the company offered any real details about its mobile ad plans.

Chief executive Steve Jobs said iAd will allow advertisers to deliver an unprecedented combination of interactivity and emotion in iPhone ads, according to Gdgt’s liveblog. By “emotion,” he seems to mean the high-quality, media-driven experience that you might get with, say, a television ad. He showed off a Nike ad with high resolution video as an example.

By building the technology into the operating system, Apple should be able to offer richer integration with the device and with apps, compared to other mobile ad services. Jobs showed off or at least mentioned the ability to play a game in an ad, have an ad detect your location, make purchases in an ad, shake your phone to play another ad, and then return to your application once it’s over. Apple will sell and host the ads and pay developers 60 percent of the revenues.

During his discussion of iAd, Jobs also made some digs at Adobe and Google, two tech companies whose relationship with Apple has turned contentious, particularly in relation to the iPhone. First, Jobs noted that mobile advertising should occur in the app, not in the web browser, where Google has made so much ad money: “Search is not where it’s at, not like on the desktop.” (Though Google will be moving more aggressively into in-app advertising if its acquisition of AdMob is approved by the government.) Jobs also noted that the video and interactivity of ads is delivered using the HTML5 web format, not Adobe’s Flash technology — a remark that apparently drew big laughs from the crowd, since the iPhone OS has been widely criticized for its lack of Flash support.