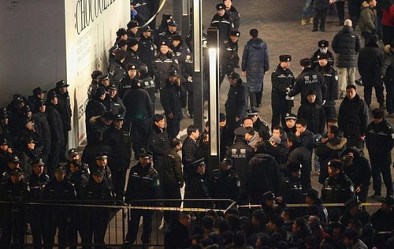 Crowds of eager iPhone owners at Apple’s iPhone 4S launch at the Beijing Sanlitun district store turned violent this morning when the store failed to open on time, which led Apple to close its other Beijing and Shanghai locations.

While we’re still awaiting more details, the situation seems to be the result of over-eager customers frustrated by Apple’s inability to keep up demand for the iPhone 4S. The Sanlitun Apple store was scheduled to open at 7 a.m., but at 7:15 a.m. a security officer with a bullhorn announced that the phone wouldn’t go on sale that day, without explaining why. That appears to be what set the crowd off.

Scalpers in the crowd were hoping to resell the iPhone 4S at a premium, and they also hired scores of migrant workers to snap up additional phones. As M.I.C. Gadget reports:

According to our tipster, the scalpers have organized into teams of 30-50 scalpers, just like military forces. They are ready to buy the phones in bulk, and re-sell the phones right in front of the store at a hefty premium. They are pricing a 16GB iPhone 4S up to RMB 5,588 (original price is RMB 4,988).

Apple has issued the following response to the situation to All Things D:

The demand for iPhone 4S has been incredible, and our stores in China have already sold out. Unfortunately, we were unable to open our store at Sanlitun due to the large crowd, and to ensure the safety of our customers and employees, iPhone will not available in our retail stores in Beijing and Shanghai for the time being. Customers can still order iPhone through the Apple Online Store, or buy at China Unicom and other authorized resellers.