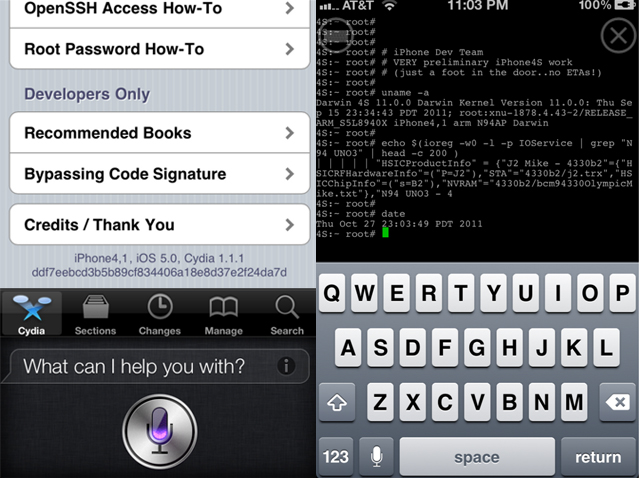 A member of the infamous iPhone Dev-Team, a group of hackers, has found a way to jailbreak the Apple iPhone 4S for the first time since its release two weeks ago.

Jailbreaking your iPhone opens the door to loading unapproved applications, and to using the phone on additional carriers. Not surprisingly, Apple hates its devices being jailbroken and used in unintended ways, so the company regularly issues operating system updates that make it harder to jailbreak.

MuscleNerd, the lead developer for the iPhone Dev-Team, posted two screenshots on Twitter of a preliminary jailbreak he completed on the 4S. Unfortunately for iPhone 4S owners hoping to break free, the software isn’t ready for a public release. MuscleNerd says there is “lots of work left” and that “huge missing pieces prevent public release.” On YouTube he added: “Lots of hurdles left, no ETAs.”

While this news won’t help you get your iPhone 4S jailbroken today, it does mean the Dev-Team could have something ready in the near future. The Dev-Team generally works quickly to find new hacks for each major Apple product release. Rest assured that we will let you know when the hacker group releases its solution to the public.

Below, you can watch a video of an iPad 2 running iOS 5 that has been jailbroken by MuscleNerd: