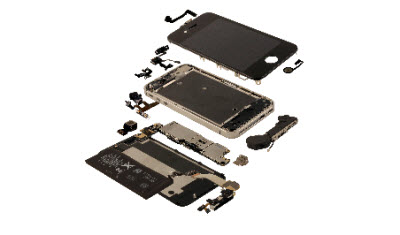 The iPhone 4S looks the same as its predecessors on the outside. But on the inside, it’s a technological wonder that costs about $196 for Apple to make, according to a teardown analysis by IHS iSuppli.

The teardown reveals the key components and their costs, and it also reveals Apple’s key suppliers of major components.

The bill of materials (or cost of all components) is $188, not counting an $8 cost to manufacture the devices, based on preliminary estimates from market analyst IHS iSuppli. The estimates don’t include any software, licensing, royalties or other fees.

The wireless module is a custom-made set of components from Avago Technologies. That part allows the iPhone 4S to be used in multiple wireless networks on a global basis. The module has a dual-mode design, which supports wireless standards for all of the partners that use Apple. Most other phone makers create a different model to support each wireless carrier, but Apple will offer the iPhone 4S on a worldwide basis.

The Avago section uses an ACPM-7181 converged power amplifier module, which amplifies a radio signal before it is transmitted. The part is unique because it can support both 2G and 3G cellular network technologies across multiple bands of the radio spectrum. It thus reduces the number of components and board space required. The Avago device cuts on costs because it merges two different chips from Skyworks Solutions as well as another one from TriQuint Semiconductor. That’s a big victory for Avago, IHS said.

Apple is also using Korea’s Hynix Semiconductor for the NAND flash memory for the first time. That could be a result of the worldwide litigation between Apple and Samsung, which has been a big supplier in the past. Toshiba has also supplied flash in the past. The base model with 16 gigabytes of flash costs $196 to make. The 32-gigabyte model costs $207, and the 64-gigabyte model costs $245.

The iPhone 4S has many common elements with the iPhone 4. But “The new device’s status as a world phone has resulted in fascinating design and component changes,” said Andrew Rassweiler, senior director of teardown services for IHS. He said the Avago module gives Apple a tech advantage over most of its rivals.

Qualcomm also scored a victory by landing the deal for the MDM6610 baseband processor, or the wireless radio, which carries a cost of $15. Qualcomm was in the CDMA version of the iPhone 4, but Intel also had a chip in the HSPA version. Qualcomm now has the baseband processor all to itself.

The iPhone 4S taps Hynix as a major supplier of flash, which costs $19.20 in the 16-gigabyte model. Toshiba has been listed as a second source for the NAND flash. In the 32-gigabyte version, the flash costs $38.40. It costs $76.80 in the 64 gigabyte model. That makes the memory the expensive subsystem in the iPhone 4S.

Apple designs the iPhone’s A5 applications processor. Samsung still makes that part, as it did the A4. The camera module has been significantly upgraded. The phone now includes an 8-megapixel camera instead of a 5-megapixel camera. The camera uses a backside illumination image sensor that improves photo quality, particularly in low light. The camera subsystem costs $17.60 and was made by Sony, with OmniVision as a second source.

The display and the touchscreen systems are the same. The display is $23, while the touchscreen is $14. Other unchanged systems include the WiFi, Bluetooth, FM radio from Murata and Broadcom, and the audio codec from Cirrus Logic.