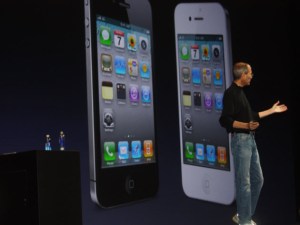 The latest batch of leaked information from Apple’s Foxconn production plant indicates that the next iPhone might have a metal back and a larger screen along with the rest of its new bells and whistles, according to 9to5mac.

The glass back on the iPhone 4 became a bit of a pain point, striking up a micro-scandal that the media dubbed “glassgate.” Any case outside of Apple’s official iPhone 4 bumper could lead to scratching and full-on cracks in the phone’s glass back. The cases are prone to dust and other matter getting stuck between them and the iPhone 4’s glass back.

Introducing a metal back to the iPhone is in line with Apple’s design ethos — it fits with the company’s unibody Macbook Pros and other devices. A metal back would also kill Apple’s concerns with the white iPhone 4. Bad white iPhone 4 parts, including the paint for the device, caused issues with its proximity sensor due to light leakage, according to Apple’s Steve Wozniak.

Foxconn sources indicated that the next version of the iPhone would also have a larger screen that is closer to 4 inches long, according to 9to5mac. And, as per the usual with Apple devices, the new iPhone will sport a more powerful processor. The next iPhone will probably include Apple’s newest A5 chip, a 1 gigahertz dual-core processor that appears in the iPad 2. A metal back would open up some space for a larger battery because it would be thinner than the device’s glass back, as well.

The iPhone 4 was announced in June after tech news blog Gizmodo got its hands on the device well ahead of its scheduled announcement. Apple is well known for its tight security, and past product leaks have reportedly led to witch hunts and firings. So expect the consumer tech giant to keep the next device under wraps for as long as possible.