This is how Apple is taking on the low-end smartphone competition.

Apple today officially announced the iPhone 5C, a cheaper iPhone that harks back to the days when all iPhones had plastic cases. Available in multiple colors, the iPhone 5C completely replaces last year’s iPhone 5 in Apple’s lineup. Apple showed off a range of colors for the 5C, including white, black, blue, yellow, pink, and green.

“It’s made with all the incredible technology of the iPhone 5,” said Phil Schiller, Apple’s marketing head, at the event.

Under the hood, the iPhone 5C sports the same A6 processor and memory as the iPhone 5S, with a slightly improved battery. Apple says it’s made out of a hardcoated polycarbonate, but that’s just a fancy way of saying “strong plastic.” Camera-wise, it keeps the iPhone 5’s 8 megapixel rear shooter but upgrades the front-facing camera to HD quality.

After all the hype leading up to the 5C official unveiling, the phone itself isn’t too different from Apple’s past low-end strategy. Just like with all of Apple’s previous iPhone launches, the 5C sports last year’s hardware. Apple just went the extra mile to make the phone cheaper to manufacture than the iPhone 5.

The iPhone 5C will also support more LTE bands than any other smartphone on the market, according to Apple. That could be helpful as Apple tries to make a bigger dent in international markets.

Along with “color,” the C in “5C” could also stand for “China.” Apple is holding a special satellite event in China to announce its new iPhones, a sign of that country’s growing importance to Apple’s bottom line. The cheaper 5C could be a way for Apple to entice middle-class Chinese consumers (new iPhones are typically too expensive for many in China). Apple also faces a strong threat in China from Xiaomi, a local company that offers Android phones with high-end specs at low prices.

But while Xiaomi can offers its Android phones for around $130 with no contract, Apple’s iPhone 5C will still cost quite a bit more without the help of a carrier subsidy. 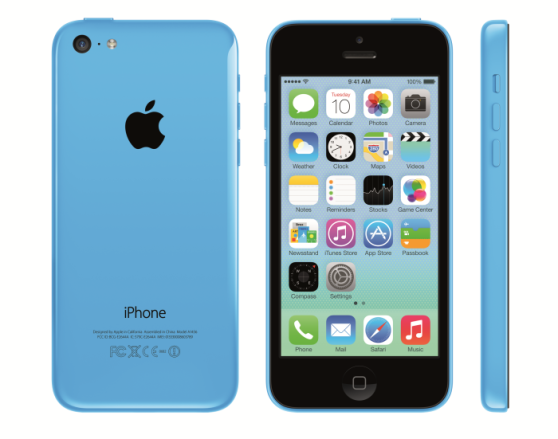