New leaked pics of Apple’s new iPhone 5S show the device will likely have longer battery life, a faster A7 Apple-made processor, and a two-LED flash that should improve low-light camera performance.

The pictures, obtained by MacRumors, could be from as early as December, making it an early prototype.

More importantly, however, if the dating is accurate, this means that Apple should be very, very close now to actually releasing the iPhone 5S. The company desperately needs it as analysts are losing faith that Apple can retain its market momentum, the company’s stock is down yet again, and Samsung seems to be outpacing Apple in product iterations.

An early release could be possible, given that Best Buy and other retails have been offering iPhone 5 discounts. One rumor has iPhone 5S screens entering mass production this month, and another indicated that the iPhone 5S could launch as early as June — although July is more likely.

A clear indication that the product is a prototype is that the internals are not quite as neat, clean, and nailed-down as in the iPhone 5: 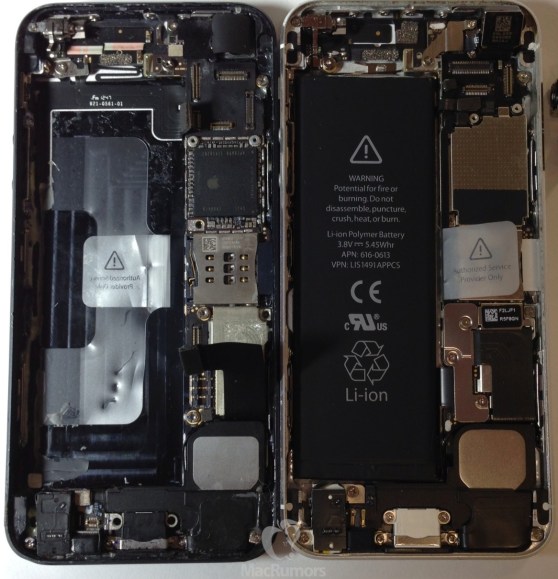 The chip is an Apple model APL0698, which probably means it will be branded as A7. Whether it is still being made by Apple frenemy Samsung, which Apple has fought bitterly in both the markets and the courts over the past years, is still unclear.

The dual-LED “smart flash” will likely provide better light for camera shots taken in the dark, while the different colors could be used in varying light conditions to create both better-quality and different-effect photos. Note that although the LEDs have a red and green appearance, they will most likely emit white light and yellow light, respectively.