Both the iPhone 6 and iPhone 6 Plus survived a battery of “breakability” tests by the gadget warranty company SquareTrade, ultimately ranking among the toughest big-screen smartphones the company has tested.

In particular, the phones shined when it came to “grip-ability,” or how easy it is to hold the phones without potentially dropping them; water damage (both survived 10 seconds of submersion in water); and drop damage.

The iPhone 6 seems especially impressive, given that it only showed a few nicks when dropped six times from four feet. The iPhone 6 Plus’s size seems to have hurt its drop test — its glass screen was unscathed, but its front and back panels also split apart. Eventually, the device also lost audio capabilities. (But if you’re really this clumsy, a case is a safe bet.)

Both new iPhones feature “ion-strengthened” glass, which theoretically makes them more durable than past Gorilla Glass panels. Judging from these tests, it seems like the new glass, despite its buzzy name, is indeed stronger.

I was also surprised by how well both phones did with water damage, given that it’s not a feature Apple is promoting. Samsung has made a big deal about the Galaxy S5’s water and dust-resistant case, but it looks like Apple has managed to build something that’s almost as tough. 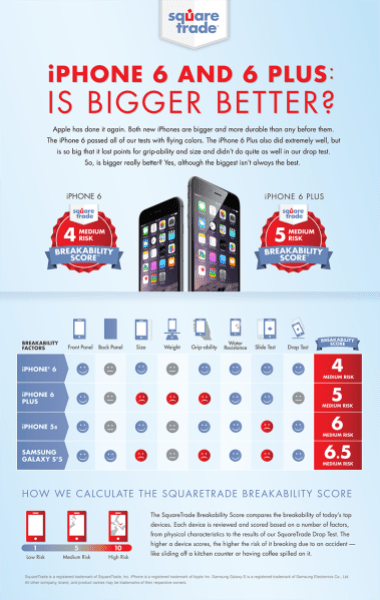