After having used the new iPhone 6s for a few hours, I have mixed feelings about some of the phone’s most important features.

You’ve probably seen the initial reviews of the new device, all of which reach the same basic conclusion: The iPhone 6s is a wonderful phone that’s worth buying if you have an older iPhone, but not a slam dunk if you already have an iPhone 6.

And there’s the rub. The new iPhone 6s looks almost identical to the iPhone 6, but Apple insists that the new features and component upgrades in the new phone make it unique. Apple’s slogan for the iPhone 6s is: “The only thing that’s changed is everything.”

So let’s cut to the chase. I bought the 64GB version of the phone outright — out-the-door price $814, without a service contract. Ouch. These are my first impressions of the things that Apple says makes the iPhone 6s a better phone than my iPhone 6.

3D Touch is useful, if a little awkward

The 3D Touch functionality seemed one of the less important updates to me, until I tried it. The technology allows you a totally new input method. Instead of tapping or swiping on the screen, you press and hold. The phone gives you a little haptic feedback buzz to let you know it understands your input.

More importantly, Apple found some compelling uses for 3D Touch in the OS. Chief among them is the ability to preview  an email without actually opening it. When looking at your inbox, you press and hold on an email, and an overlay pops up providing a look (or “peek”, as Apple terms it) at the content of the email. You no longer have to open the email to see if it’s important, and then click back to the inbox view. 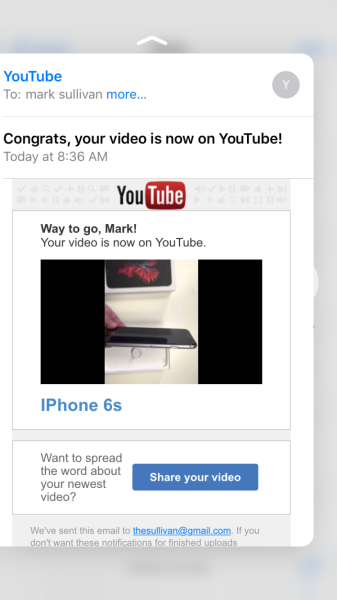 To me, this is a material improvement to the experience of mobile email. And email is probably the service I use most on my mobile device.

It’s not perfect. When I press down to “peek” at an email, my finger or thumb is usually covering up the content in the email I want to see. And you can’t lift your finger or the peek view will disappear. You can deftly slide your finger out of the way while still maintaining pressure on the screen, but that’s awkward. 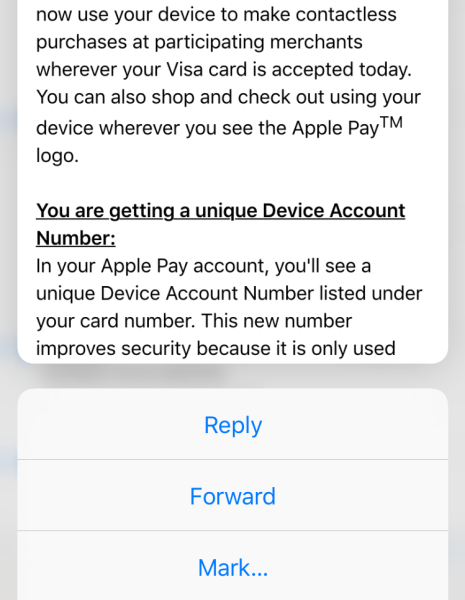 Above: Slide the “peek” view up and you get some email options.

The other killer use of 3D Touch is identifying specific words you want to edit while writing a text message. Many times I will dictate a text and there will be one word in the middle of the sentence that’s incorrect. But selecting that word for editing is a challenge on my iPhone 6. 3D Touch on the iPhone 6s allows you to press down on the sentence you’re typing and then slide your finger to the right word. This will save me time and embarrassment. It also gives me an effective weapon to counter the work of Auto Correct, which was designed by Satan and hates me. 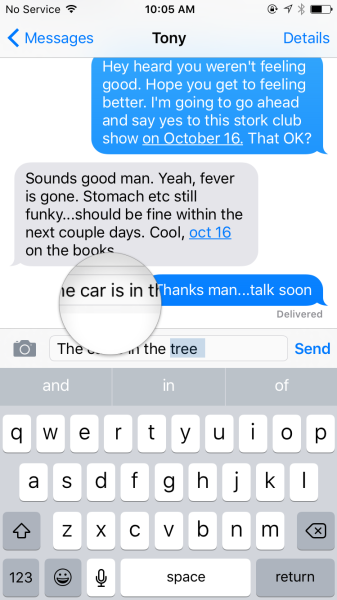 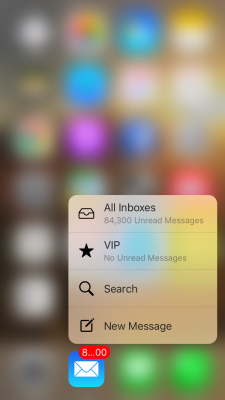 But this too, takes some getting used to. The trick is to press and hold to enable the word selection feature, but then lighten up your pressure to be able to move from word to word smoothly.

3D Touch can be used in several other scenarios. Many of the Apple apps on the phone have 3D Touch options built under the icons. So, for example, you can press and hold on the Mail icon and see a menu of common actions like “search emails,” and “compose.”

The larger 12-megapixel camera sensor creates images that are clear and sharp, but the quality difference between the iPhone 6s and the iPhone 6 cameras is less than I expected. Images shot with the 6s are bigger — that is, they’re 4032 × 3024 pixels and 3MB in size, while photos shot on the iPhone 6 (with its 8-megapixel camera) are just 3264 × 2448 and 2MB in size, using default settings.

I shot the same image at the same time with both phones, using the default camera settings. I then opened both images in Preview on a large monitor and zoomed way in. The image on the right is the one shot with the iPhone 6s; the one on the left is the iPhone 6 image. The 6s image looks slightly brighter, but when the two images, which started out at different sizes, are zoomed to the same size, the resolution looks about the same. The iPhone 6s also offers optical image stabilization for video, and it works surprisingly well. I intentionally shook the phone while shooting a video, but upon playback I could detect almost no shaky-cam effect. (This is a standard definition video, shot while zoomed in, to demonstrate image stability.)

We will be digging deeper into the new phone over the next week and reporting on the killer (and not-so-killer) features. We’ll be publishing a full review only after we’ve had a chance to live with phone for a while and can provide a fuller account of the phone’s features, and describe how useful those features really are in everyday life.