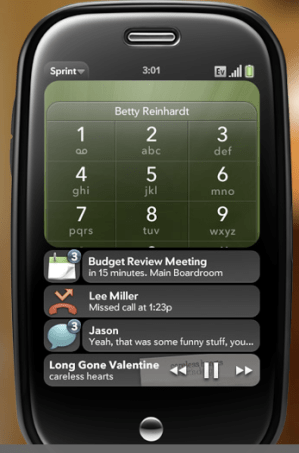 One of the most glaring omissions from Apple’s upcoming iOS 4 mobile operating system is an improved notification system. While the iPhone will finally be getting multitasking, along with a wealth of other features, it’s still encumbered with an annoying pop-up notification system that never fails to disrupt your work flow.

But now, it appears there’s some hope: Rich Dellinger, who developed Palm’s “non-intrusive banner notification system” for its new WebOS devices, is returning to his former employer Apple as a senior user interface designer, PreCentral reports. Dellinger started out as a Senior Technical Support Engineer at Apple, but eventually moved on to Web design and user interface design before heading to Palm in 2006.

His other accomplishments at Palm (culled from his LinkedIn profile) include:

Created the interaction and visual design for a suite of media applications for Palm OS 5, combining media browsing, content sharing and video/image capture into a integrated user experience.

Clearly, he’s going to bring more to Apple than just a shiny new notification system (although I hope that’s his current priority).

In April, Palm lost Michael Abbot — its senior vice president of software and services — to Twitter, and offered stay packages to other key employees to keep them from straying. Shortly after that, HP bought Palm for $1.2 billion. More recently, WebOS user interface designer Matias Duarte left Palm to work on Android at Google.

The brain drain isn’t all that surprising given Palm’s lackluster sales since the launch of its Pre smartphone. And in a way, it’s a good thing; now some of the creative minds who made webOS such a breath of fresh air will be able to bring their insight to other mobile platforms.