The green robot, however, still has majority market share. 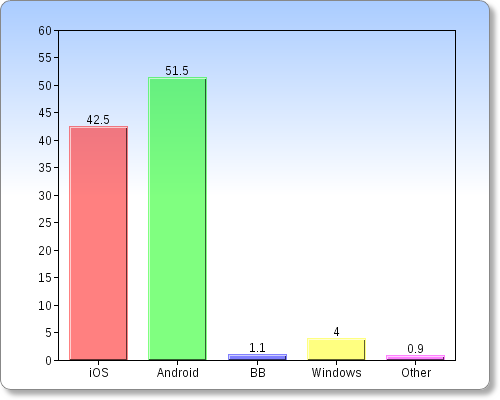 A strong performance from Verizon in which 3.8 million of its 7.5 million new smartphone activations were iPhones gave us a preview of Apple’s unexpectedly large iPhone sales this past quarter. Thanks mostly to that growth, Apple grew iOS sales from April to June by about 8 percent over last year, moving from 39.2 percent market share to 42.5 percent. That’s up from the previous Kantar three-month period, in which Apple held 41.9 percent share, which itself was also higher than 2012 numbers.

Above: Android was everywhere, literally

Android still comfortably owns the market with 51.5 percent market share, down slightly from 52.6 percent, while globally the numbers are even stronger, of course. When you look at global numbers, Android has held about a 75 percent market share since mid-2012. The question becomes, however, what could Apple have done with a new, cheaper iPhone — recently accidentally confirmed by China Labor Watch.

A new product launch in this past quarter would almost certainly have pushed Apple’s share over the 50 percent mark, perhaps eclipsing Android’s domestic share for the first time since Christmas 2012. It would have helped Apple internationally as well, where Apple had a horrible quarter these past three months. And it would have helped Apple compensate for very weak iPad numbers.

The upshot, according to Kantar, is that Verizon is doing very well indeed, with the largest share among U.S. carriers of smartphone customers, while adding more than AT&T, Sprint, or T-Mobile.

And if the U.S. market presaged the global market, so would Apple.