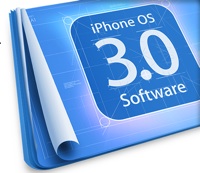 Apple made a flood of announcements about version 3.0 of its iPhone operating system this morning. I have to say, I was pretty impressed — despite the rumors, there was no mention of a tablet computer, but a solid majority of the complaints I’ve heard about the iPhone were addressed in today’s news.

I liveblogged the event on FriendFeed, and we’ve been digging deeper into some of the announcements throughout the day. It’s a lot to take in, though, so if you’re feeling overwhelmed, here’s a summary of the big news, with links to more in-depth coverage when relevant:

Push notification — This is a way for iPhone applications to communicate with users through things like text alerts even when the app isn’t open on the phone, which is important for whole bunch of apps. For example, messaging startup Meebo said it didn’t want to build a native iPhone application until push notification was available. And why can’t you just run apps in the background? According to Apple, that would drain the battery much more than push.

In-app purchase — App developers will now be able to explore other models to make money, besides charging a one-time fee, or making the application free and running ads. Those models include subscriptions or charging for additional content. This is obviously a boon for iPhone games, but it’s also relevant to other apps, such as the developer of an eBook reader who wants to sell content through an eBook library. (This is the kind of flexibility is what mobile payment startup Mogees wants to help developers enable; Mogees isn’t available on the iPhone yet, and now it probably isn’t necessary.)

Custom device applications — Third-party applications will now be able to interact in a customized way with the devices that you connect to your iPhone or iPod touch, as VentureBeat writer MG Siegler predicted. The obvious example is an application that allows you to equalize a speaker, but there are more serious apps you could build, too. LifeScan demonstrated an application that integrated with a diabetic’s glucose meter. And for all you big-thumbed folks asking for an external keyboard, I bet someone could build an app for that as well.

Cut, copy, and paste — Users finally have the ability to copy and paste text, even across applications. They demonstrated this feature on-stage, and it looked quite easy to use: You just double click on the text you want to cut or copy, and a menu balloon appears above it. If you want to select a more text, you can drag the selection bar to encompass an entire passage. You can also copy and paste multiple photos. This is one of the 100 new features Apple says it will be adding for iPhone users (as opposed to developers).

Improved search — Apple has brought the search tool that’s already available in the contacts menu to other “core” applications, such as email, calendar, and iPod. For email, this isn’t limited to the messages you’ve downloaded to your phone — you can even search through emails that are on the server. There’s also a new “Spotlight” home screen that allows you to search across all those applications.

The iPhone OS 3.0 is now available for developer testing, and be released to consumers sometime this summer. Oh, and Apple also shared some impressive numbers: 25,000 apps are available in the App store, and those apps have been downloaded 800 million times.