In less than two weeks, a majority of iPhone owners have updated to the latest version of Apple’s mobile operating system, warts and all, according to data compiled by web and mobile ad network operator Chitika Insights.

An estimated 60 percent of iPhones are now running iOS 6, Chitika found. The company sampled millions of mobile ad impressions between September 18 and October 1, 2012 to arrive at its conclusion.

The massive population of as-current-as-possible iPhones is especially notable considering the onslaught of negative press around the shortcomings of Apple Maps, which is installed by default on upgrade. The Maps situation, overblown or not, has proved such a nightmare for Apple that CEO Tim Cook issued an apology last week, and the company now recommends other maps applications in its App Store.

iPhone users showed more alacrity in upgrading than iPad and iPod owners. Approximately 45 percent of iPads and 39 percent of iPods are running iOS 6, according to Chitika’s findings.

The figures, while not official Apple numbers, point to the Cupertino company’s continued success at getting its hundreds of millions of iOS users to immediately install software updates. This is an area where Google has consistently struggled with Android due to complicated relationships with device manufacturers. 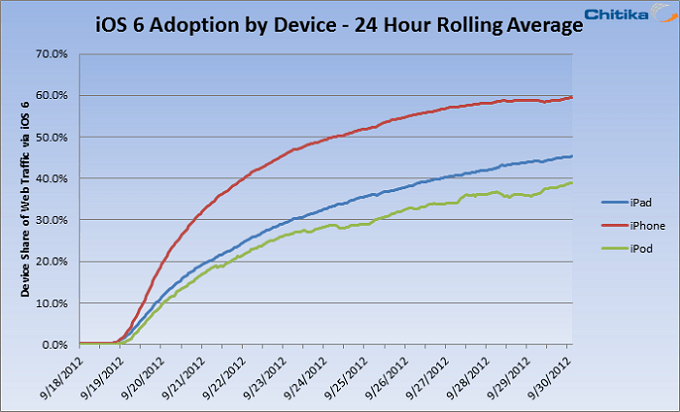