The revamped SkyDrive app hit Apple’s marketplace today with a whiter, iOS 7-inspired interface and a few new features, including auto-upload functionality. It’s the first update for the two year-old app since the spring — and the first major one in even longer.

The “Camera Backup” feature enables you to automatically upload all the content in your camera roll to Microsoft’s cloud storage locker, which offers a free 7 GB before you need to start tossing in some cash for the premium tiers. When you flip on auto-upload, you can choose to use your data network or just Wi-Fi, then the app will start uploading your entire back catalog of photos and videos to SkyDrive. 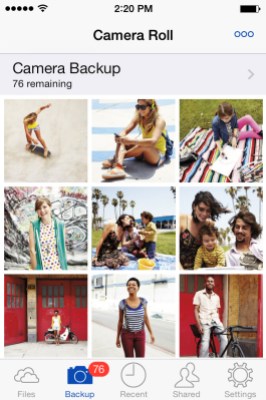 Above: SkyDrive’s “Camera Backup” feature in action on iOS

Flickr, which offers a terabyte of free cloud storage for photos, added an auto-upload feature to its iOS app in early October. The SkyDrive team, unsurprisingly, thinks it has the superior offering for iOS.

“When you’re thinking about a scenario like this where you’re backing up your photos and videos, Flickr is really a service about sharing,” said Ryan Hoge, lead program manager for SkyDrive, in a conversation with VentureBeat. “What we’re trying to roll out here is having all of your photos — and having the feeling that they’re yours, they’re private.”

But you do want to share them, you can post directly to Facebook from SkyDrive. And SkyDrive isn’t only for media files; you can also view and edit Office documents.

SkyDrive is heavily integrated into Windows 8.1 and other Microsoft products like Xbox One. But that doesn’t mean you need Microsoft hardware to use it, as the SkyDrive team is demonstrating with this release.

“We want to create a great experience no matter what platform you’re on,” said Angus Logan, head of product marketing for SkyDrive, in a conversation with VentureBeat. “We want you to always have your files with you. If we discriminate against any one platform, then we sort of break that promise.”

There is one neat feature exclusive to Windows Phones, though: optical character recognition. If you upload a picture to SkyDrive that includes printed text somewhere in the image — say a cocktail menu — SkyDrive can generate metadata so that when you search for “cocktail,” it will automatically find that image.

There’s also a SkyDrive app available for Android, but the SkyDrive team declined to comment on when it might get an update to bring it in line with this new iOS release.

Microsoft SkyDrive competes with cloud storage services like Google Drive, Dropbox, and Box, among others. (Now, developers, please build an app that links all of them.)