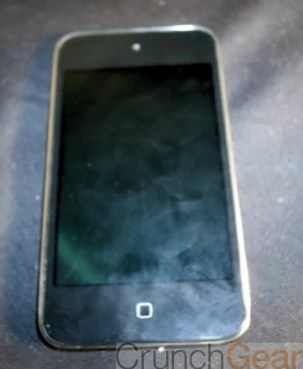 The leak is particularly interesting because previous rumors have pointed to Apple removing the home button altogether in future iPhones and iPads. Replacing the mechanical home button with something that’s touch sensitive is one way to accomplish that. The leak is a sign that we may see a similar capacitive home button in the iPhone 5. Or, as is often the case with these sorts of leaks, it could be complete bunk.

Why would Apple opt for a capacitive home button? It’s possible that it wants to get rid of the older physical button because it’s so prone to error. The current iOS home button is one of the few mechanical aspects of Apple’s devices, which means that it’s also subject to wear and tear. Apple could easily replace the double-click functionality on the current home button with a double-tap on the touch sensitive version.

The prototype is marked with the “DVT-1” badge, which CrunchGear says has also appeared in previous early iPod Touch prototypes. The device also has 128 gigabytes of internal storage — twice that of the largest current iPod Touch. It has a metal back (which is also rumored for the iPhone 5), but then again so do current iPod Touch models.