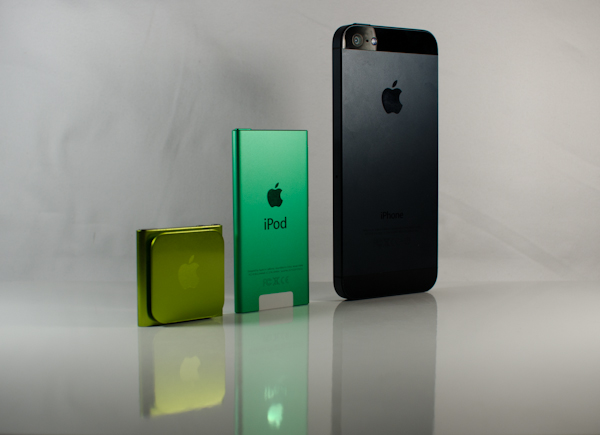 As much as the Touch has (or hasn’t) changed, the iPod Nano is completely new. It took Apple seven years, but it has finally perfected the miniature media player. And it’s so cute who could resist?

The previous generation iPod Nano was a square device that Apple envisioned users would wear on their belts for jogging. It turned into a smartwatch instead. That Nano did, however, have one vital improvement over older models: no “classic” scroll wheel, just the touchscreen. The new Nano uses the same touchscreen technology but on a larger display. The 2.5-inch 432-by-240 pixel resolution display is sharp and certainly good enough to watch movies and TV on, though it may seem absurd to do so on such a small screen. Then again, perhaps not. 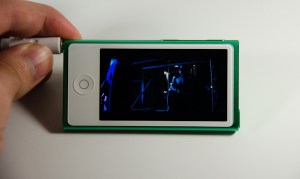 I watched two full-length films on the Nano and it was a surprisingly good experience. With a decent pair of headphones or speakers, watching a movie on a small screen is not as crazy as it sounds. That’s because of the new thin-and-light design and the high-quality widescreen display.

The new Nano is lighter and thinner than any predecessor. At just 0.21 inches thick and weighing 1.1 ounces, no one will ever get tired holding the Nano, even for a three-hour film. It’s so light that you can hold it by the end of a plugged-in audio cable instead of the Nano itself (see left picture). It’s absolutely tiny at 3-inches tall and 1.56-inches wide.

Apple has updated the layout of the Nano to better support the larger screen by adding a home button that works just like it does on the iPod Touch and iPhone. It also has a play/pause button between the volume rocker, and settings like volume control and fast forward are adjustable onscreen. Navigating between the two homepages is fast, and the icons are large enough to see even if you have poor eyesight 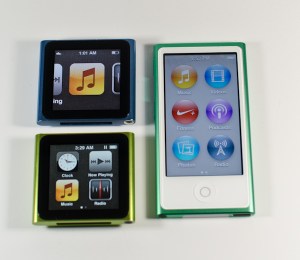 The Nano uses a slimmed-down version of iOS that features a handful of basic apps, including music, video, fitness (with Nike+), FM radio, podcast, photos, and clock. The Nano uses swipe gestures to navigate back to the previous screen, though the home button instantly returns to the home screen.

This minimalist user interface is simple. Open apps with one tap and exit by swiping right or pressing the home button. That’s it. Even the app icons are updated with easier-to-understand icons if the text is too small.

The bad: too small for an antenna

FM radio is a great feature on the iPod Nano, but the device itself is too small to house the antenna. The Nano uses connected headphones as an antenna instead. In my experience, headphones make terribly weak antennas; they provide poor signal strength unless you are in a good area. The bundled EarPods are no exception. They also aren’t made for exercise, as the Nano is; the EarPods sound great but fall out easily when jogging. Thankfully, the Nano supports Bluetooth headphones, so you can exercise without ever worrying about that dangling cable. 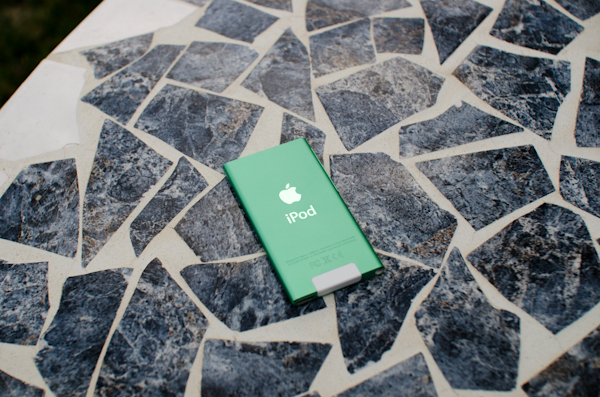 This iPod Nano isn’t just the best media player of its class (it’s the only media player of its class), it’s practically perfect. The tiny device does everything users could want within reason. It plays video well and does so for up to 3.5 hours, and it’s so light that you can hold it that entire time without getting tired. Thirty hours of audio playback is long enough to use for a week on a single charge. It looks excellent in almost all of the eight available colors. And it doesn’t include anything users don’t need, like a camera.

I love the form factor and ease of use of the operating system. The only thing missing is a built-in radio antenna and potentially HD radio (though the latter feature didn’t help Microsoft’s Zune HD much). With a wealth of color options, Bluetooth for wireless headphones, and a reasonable price of $150 for 16GB, the iPod Nano is a beautiful, excellent media player.